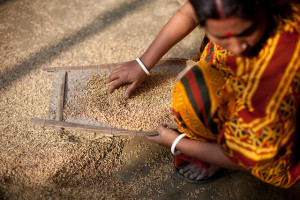 Intimate partner violence (IPV) is the most pervasive form of violence globally—with 1 in 3 women physically or sexually abused by a partner in her lifetime. Of course, averages hide important disparities: Women living in Tokyo’s bustling urban affluence face a different probability of victimization than an impoverished women living in the sprawling slums of Lagos. Yet, partner violence remains stubbornly high—affecting women in all walks of life across the globe.

Despite knowing a lot about prevalence and detrimental impacts of IPV, we are still at the infancy of knowing what works to prevent violence. One focus has been on transforming patriarchal and inequitable attitudes and norms that sustain violence. While enormous progress has been made in the last decade, largely by public health professionals and epidemiologists, in designing and testing interventions -- this is no easy task. Social norms that perpetuate gender inequalities are hard to measure and may take years to show meaningful shifts. Equally important are the costs and challenges of taking such interventions to scale. More recently, development economists have explored this question from a different angle, from the start point of anti-poverty programming, including cash transfers. Cash transfers are a widely used policy tool for decreasing poverty and improving human capital, reaching up to 1 billion people across Latin America, Africa, and Asia. Cash is often given directly to women, thus potentially changing power dynamics within the household and social norms. Their scale and reach to the most vulnerable populations have led many to ask, “If cash can change household well-being and power dynamics within households, can cash transfers also be used to decrease IPV?”

In 2011, the World Food Programme (WFP) commissioned the International Food Policy Research Institute(IFPRI) to conduct a five country study comparing the effectiveness of food and cash transfers in improving food security of poor households, in Bangladesh, Ecuador, Niger, Uganda, and Yemen. In two of the countries – Ecuador and Bangladesh - research teams were motivated to learn more about how these programs affected gender dynamics within households and expanded the studies to allow a closer look at women’s lives over the intervention period. In particular, quantitative and qualitative methods were used to assess the impact of transfers, given primarily to women, on gender dynamics and IPV. Impact evaluations were conducted using the gold-standard, randomized controlled trials, which allow a causal link to be established between the interventions and IPV.

Collecting data on IPV within economic or poverty targeted interventions is atypical, but these studies highlight that we can learn a lot by doing so, even when reducing violence and altering gender dynamics are not the primary aims of the intervention. Taking certain measures when collecting IPV data is important, however. Enumerators must be adequately trained on how to solicit sensitive information and how to enact safety measures that guarantee privacy during interviews and that ensure no other household member is aware that survey questions ask about IPV. Enumerators should also provide all women with disguised contact information for local IPV support services for referral if available, regardless of disclosure of IPV. In order to elicit accurate assessments of violence, quantitative surveys should ask multiple behaviorally specific questions on a range of abusive acts, a technique shown to maximize disclosure; in Ecuador and Bangladesh, research teams administered the internationally validated standardized IPV measures from the WHO Violence Against Women Instrument. For qualitative in-depth interviews, similar protocols of privacy and safety should be enacted. Committing to a safe, ethical, and valid data collection process for IPV does involve small increases in time and resources—but doing so within an existing impact evaluation can add a lot to what is learned.

What have we learned so far? The recently completed Ecuador study, published in the American Economic Journal: Applied Economics, shows that women in households that were given economic based transfers (food, cash or food vouchers) along with nutrition training showed significant decreases in physical and/or sexual violence and controlling behaviors by their partners over the six month study period (decreases ranging from 19 – 30%). What was responsible for these changes? A mixed methods study forthcoming inBMC Public Health, reveals that a key factor was the decreases in poverty-related stress alongside increases in food security of households, which led to less tension and arguments over women needing to ask men for money to buy food. A second factor was that, by targeting women, the transfer program empowered women, improving their bargaining power in the household, self-confidence, and freedom of movement.

Although these results are promising, there is still a lot we do not know. For example, many cash transfers including the Ecuador program combine transfers with other components, such as nutrition trainings and conditions related to education and health, which may have implications for women’s social or human capital. So far, no study has been able to disentangle the impacts of cash versus the other components on IPV. Moreover, we still do not know enough about whether in specific contexts or sub-groups, women might actually be put in danger from receiving cash, due to men utilizing IPV as a method to extract the cash or due to the shift in power dynamics leading to male backlash if men use IPV to re-assert their authority. Most evidence to date on cash transfers and IPV has been in Latin America and given that the effects on IPV may depend on gender norms that vary by context, we need to collect evidence from other regions before concluding that transfers can reduce IPV globally.

This is where the ongoing Bangladesh study fits in. Recently awarded funding from the World Bank Group and nonprofit Sexual Violence Research Initiative, the Bangladesh case study will help to fill these knowledge gaps in several ways. First, the intervention has both transfer-only arms and combined transfer-and-child-nutrition-training arms. Since the intervention arms are assigned randomly, we can disentangle, for example, whether a transfer is enough for impacts on IPV or whether adding training is really necessary. Second, the study comes from a context where IPV is very high – about 53-62 percent of women in Bangladesh report experiencing it in their lifetimes – and where gender norms are very different from Latin America.  For example, female seclusion (women staying inside the home) is a strong sociocultural norm in rural South Asia.  This means that the specific pathway found in Ecuador – disputes being reduced because women no longer need to ask for money for daily purchases like food – may not apply in this context, as men are the ones who typically go to the market. Changes in female bargaining from transfers to women may also play out differently – a study published in Journal of Development Economics showed that, in rural Bangladesh, even when a transfer was specifically targeted to a woman, many dimensions of control over the transfer still went to her husband. Patriarchal norms could also plausibly contribute to backlash if large transfers to women subvert traditional power dynamics.

In a world where we struggle to identify cost-effective and scalable programming to reduce IPV, poverty-targeted interventions such as cash transfers are emerging as promising tools for decreasing IPV. There is still a lot we need to learn: More data and studies are needed on cash transfers and IPV in different contexts, with a specific focus on measuring potential pathways such as bargaining power, stress, and gender norms. We are still a long way from where we need to be – no woman, man or child should suffer from violence inside their own home – but just maybe cash transfers offer a tool to shift us in the right direction.

The World Food Programme impact evaluation studies referred to in this blog were undertaken as part of PIM’s research on Improved Social Protection for Vulnerable Populations. The Ecuador study was supported by funding from the Government of Spain received through the World Food Programme, as well as from International Initiative for Impact Evaluation (3ie) and an anonymous donor. The Bangladesh impact evaluation received financial support from the German Ministry for Economic Cooperation and Development (BMZ), the UK’s Department for International Development (DFID), the Swiss Agency for Development and Cooperation (SDC), the United Nations Development Programme (UNDP), the United States Agency for International Development (USAID), the PIM Data Collection Innovations fund, and the IFPRI’s Bangladesh Policy Research and Strategy Support Program.