POLICY SEMINAR: PAST, PRESENT, AND FUTURE OF THE COMMONS

by John Powell, President of the International Association for the Study of the Commons | October 22, 2018 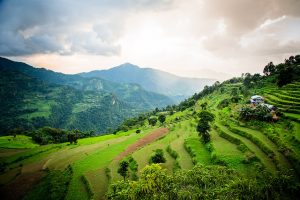 There is a long history of common property, which we can define as resources held and managed collectively by a group. But what is their relevance for today … and for tomorrow? An Oct. 4 IFPRI policy seminar, held to mark the first World Commons Week, provided perspectives on past, present, and future challenges and opportunities.

Ruth Meinzen-Dick of IFPRI opened the discussion by emphasizing the importance of the commons for lives and livelihoods around the globe, focusing on security of tenure as a major issue affecting both current and future utilization of commons resources. Speakers identified a number of related issues, including continued support to enable local resource users to utilize their rights and the need for effective processes to register land rights.

My presentation provided an overview of 900 years of history of the English commons, and explored the difficulties of creating and implementing new legislation to formalize common land and rights in the UK Commons Act of 2006. Earlier legislation had been repealed due to poor specification of common land boundaries and rights (requiring four decades of judicial review to sort out problems that ensued). Adequate government support and a participatory approach were key to achieving successful legislative change where powers to regulate rights of resource access and use are redistributed. In the UK case, the 2006 Act enables holders of commons rights to acquire statutory powers to enforce local rules through majority voting (where previously unanimous support was required for any management decision).

Registration of land rights is only one (albeit difficult) aspect of enabling community access and use of communally held local resources today in many parts of the world. Peter Veit, director of the World Resource Institute’s (WRI) Land and Resource Rights Initiative, noted that in a recent study of 15 countries, similar issues relating to land rights kept cropping up. These included costs in time and money and the prerequisites needed in order to obtain rights. A key finding was that in most countries, the rules enabling private sector companies to obtain land rights were much easier than those for local communities. 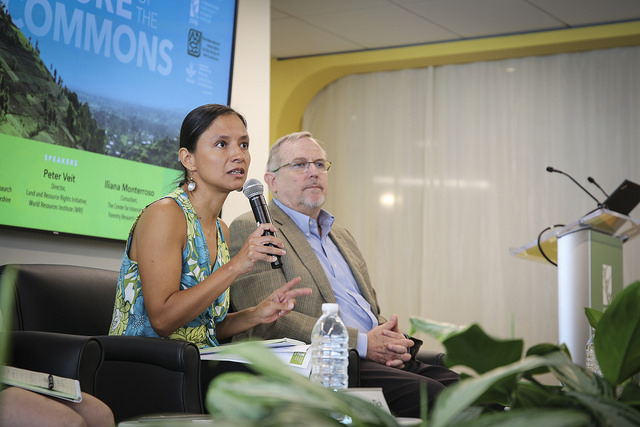 Iliana Monterroso of CIFOR and Peter Veit of the World Resources Institute take questions on the future of commons. Rights to land and other forms of common property face pressures around the world. Photo: Jamed Falik/IFPRI

Iliana Monterroso of the Center for International Forestry Research (CIFOR) presented a more optimistic view of the potential role for investment in supporting management of commons resources. While recognizing that investment is often a “black box” in terms of understanding what is being invested and by whom, she explained that the existence of community rights to resources can foster investment that recognizes the social character of commons ownership. Focusing on the case of the Mayan Biosphere Reserve in Mexico, Monterroso noted that investment in forest protection (such as fire protection, Forest Stewardship Council certification, enforcing concession boundaries) had brought positive benefits in local jobs, support for community infrastructure, and social mobilization.

Thea Hilhorst, a senior land governance specialist at the World Bank, noted that the lessons from research indicated two things: Commons continue to be essential for local communities and once lost they are difficult to restore; and the bundle of rights is what matters in terms of being able to utilize commons resources, thus acquiring legally recognized land rights is now essential.

She also noted that the details of how laws are implemented on the ground is the crucial aspect—not what is written down in policy or legal documents—and identified new technologies (e.g. remote sensing, internet) as opportunities to monitor and enforce compliance regarding resource utilization.

A lively audience discussion explored the resources required for the acquisition of land rights, the need for more detailed information on how much communally held land actually exists, and the level of planning required to deal with uncertainties affecting future utilization of commons resources (e.g. from climate change). Audience members noted that commons face pressures from rising population and from commercial and business interests, and asked for good examples of where commoners had successfully developed commercial enterprises. In many areas, Veit noted, the “race for land rights” is not being driven by a local desire to invest in commercial ventures, but by the efforts of private sector and foreign investors to lock up land for future development.

Overall, the value of the seminar lay in the identification of key issues that researchers, policy makers, and practitioners need to explore more fully if we are to continue managing resources “in common” into the future. In many cases, traditional forms of communally held resources are viewed as fighting a losing battle against more well-equipped and better-financed external (to the community) investors. Panelists stressed the need to work out how to support local communities in obtaining investment to secure rights to their commons, and emphasized that in order to do that, we need to take a more innovative approach, taking advantage of the opportunities offered by new technologies.