WHY RAISING ASPIRATIONS MAY BE KEY TO ACHIEVING GENDER EQUALITY 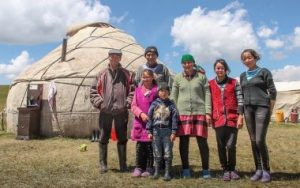 Recent assessments of progress toward the UN Sustainable Development Goals (SDGs)— including SDG5, which calls for gender equality and the empowerment of all women and girls—make clear how important this focus is. As the United Nations has noted, “Based on current trajectories, existing interventions will not suffice to achieve [SDG5] by 2030. Innovative approaches that disrupt ‘business as usual’ are central to removing structural barriers and ensuring that no woman and no girl is left behind.”

As we seek new ways to empower women and girls, emerging evidence—including a recent IFPRI analysis of gender attitudes in Kyrgyzstan—suggests that raising the aspirations of women or their husbands can be one effective route to consider.

A growing body of research shows that people with ambitious goals tend to be forward-looking and entrepreneurial. Recent evidence reveals that they are more likely to save, use new technologies, operate a small business, and invest in their children’s education. They also have higher levels of civic engagement. As a result, people with higher aspirations tend to have higher incomes and are more likely to be community leaders and to hold salaried or white-collar jobs.

A separate set of literature suggests that empowering women and involving them in decision-making can improve both their lives and the lives of their families. Ensuring that women are economically active and have skills, knowledge, and other human capital can lead to higher household income and greater wealth creation. Involving women in decision-making can also make farms more efficient, and improve health, nutrition, and education outcomes for children.

Thinking about these two sets of findings together, we were interested in exploring whether raising a woman’s aspirations might be one path to women’s empowerment. We were also interested in examining the aspirations held by husbands, who often have considerable influence over how much decision-making authority their wives exercise, as well as their access to resources.

To test our idea, we turned to Kyrgyzstan. Historically, women have worked alongside men herding animals in this traditional Central Asian nomadic culture, though each gender had distinct roles. After farms and pastures were collectivized during the Soviet era, both genders were treated relatively equally when it came to mandatory work and education. Today, more than 25 years since the collapse of the Soviet Union, there is virtually no gender gap in educational attainment in the country. However, there has been a revival of some traditional practices, such as bride kidnapping, highlighting the very real threat of women’s disempowerment, even as we strive for empowerment around the globe.

We used data on aspirations for the future and gender attitudes, as well as reports about women’s involvement in decision-making (from both women and men), from 2,529 households surveyed as part of the 2016 round of the Life in Kyrgyzstan Study (LiKS) survey. In the survey, individuals were asked about their current and desired achievements in five areas: household income, asset wealth, education, social status, and security.

As we assessed the data, we asked two questions: Does having higher aspirations in those five domains predict more egalitarian gender attitudes? And do higher aspirations translate into greater involvement of women in decision-making?

While there is more work to be done, our initial assessment offers insight into the psychological determinants of women’s empowerment. The findings are promising, and suggest that raising aspirations is one route to empowering women—while not having high aspirations may be partly responsible for a failure to empower women.

Having a husband who sets ambitious goals for himself predicts more egalitarian gender attitudes for both the husband and his wife, we found. Meanwhile, higher aspirations on the part of wives may be an even more important predictor of women’s empowerment. Not only did it predict that both the wife and her husband express more egalitarian gender attitudes, but we also found that women with higher aspirations are more involved in household financial management and major economic decisions (though they are no more likely to be involved in marital or non-financial decisions).

All of these results hold when taking into account the household’s current standing (its current income, its asset wealth, etc). That is, even when comparing two households with similar poverty profiles, the household with more ambitious adult members is significantly more likely to empower its female members. And they hold even when using instrumental variables techniques to address the fact that empowerment may simultaneously drive ambition.

It can be very difficult to change traditional gender norms. But our initial findings suggest that efforts to boost aspirations, particularly among women, may be a promising and low-cost way to change traditional norms and family roles and expand opportunities for women. Earlier research shows that effective approaches to increasing aspirations among women and men include exposing them to role models and women in positions of power, introducing well-paid job opportunities, or increasing women’s interactions with female peers.

This post first appeared on the IFPRI blog. Katrina Kosec is a Senior Research Fellow with IFPRI's Development Strategy and Government Division and Leader of PIM's research cluster on Gender, Agricultural Productivity, and Rural Transformation.

Research featured in this post was undertaken as part of and supported by PIM and by the Ministry of Finance of the Russian Federation under IFPRI’s Collaborative Research and Capacity Strengthening Program for Enhancing Agricultural Productivity and Food and Nutritional Security in Central Asia. This piece is based on work that has not yet been peer reviewed.