To better address the specific research and policy needs of individual developing countries, IFPRI began a concerted process of establishing and building up its research programs within a number of those countries starting in 2004, expanding on its existing international presence. 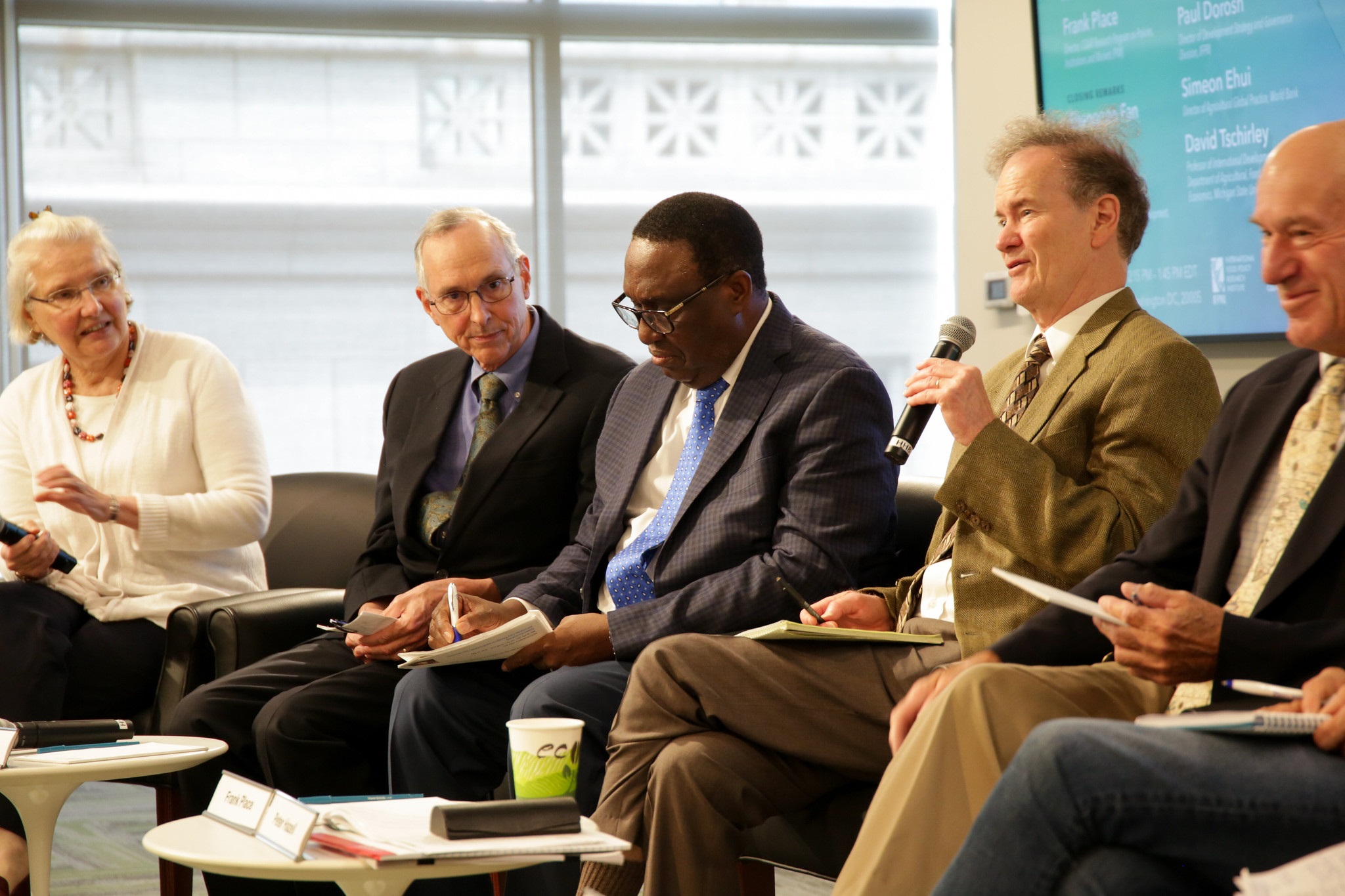 A May 22 seminar organized by IFPRI and the CGIAR Research Program on Policies, Institutions, and Markets (PIM) explored the results of the recently released assessment of this process. Panelists from the World Bank, the U.S. Agency for International Development (USAID), Michigan State University and IFPRI commented on the findings and shared their own experiences with outposting staff. The seminar was held during the semi-annual meeting of the IFPRI Board of Trustees.

Karen Brooks, adjunct professor of Global Human Development at Georgetown University and former director of PIM, kicked off the event by introducing the research studies, and the questions of the day: How have embedded IFPRI teams contributed to national policy and strategy development? And what can we learn from the successes and challenges of each country program?

PIM Director Frank Place reviewed how IFPRI’s decentralization process has progressed over the years. Since 2004, when many of the country programs opened, there has been a tremendous expansion in the numbers of outposted internationally recruited researchers, up to the current level of 44 today, he said. 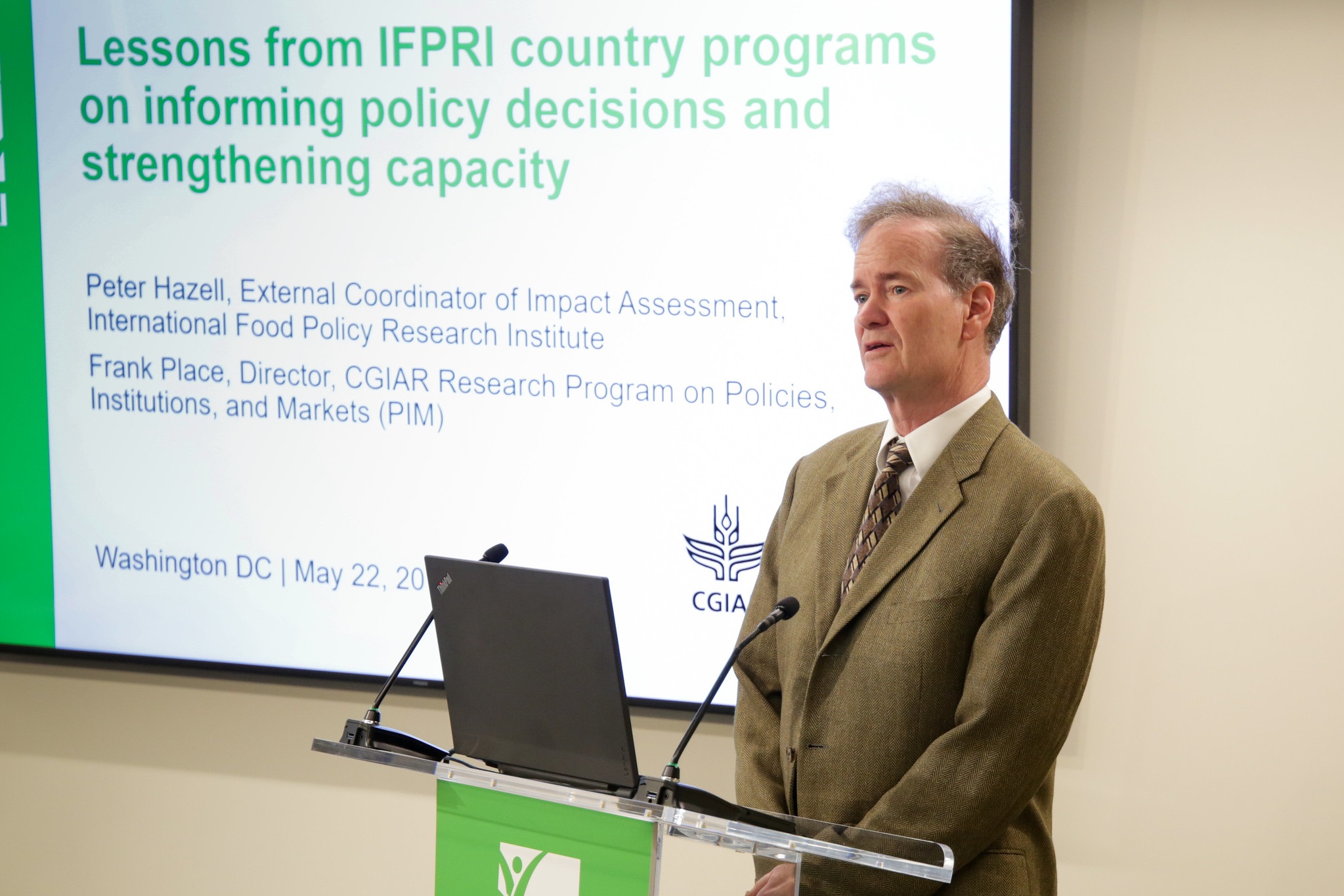 The primary aim of the assessment was to find ways to make IFPRI country programs and the decentralization strategy more effective, Place said. He described the study design and rationale for the qualitative and quantitative components of the assessment, including an in-depth qualitative analysis on six country programs in Africa by Eric Tollens of KU Leuven, and a quantitative impact analysis led by IFPRI Africa Region Deputy Director Sam Benin, a careful analysis of datapoints from 57 countries over 33 years.

Peter Hazell, IFPRI’s external coordinator for impact assessment, summarized the study’s main findings. “By and large, every country program that we've looked at has made valuable contributions to policies and capacities in their host countries,” he said.

In explaining what makes a country program successful, Hazell noted the importance of selecting the right countries. “The best successes seem to be where IFPRI has gone to countries where it already had an established reputation and an internal knowledge base from past research—and where governments were keen for a greater engagement with IFPRI,” he said.

Once such suitable locations are identified, providing proper and sustained support to outposted researchers is key, Hazell observed.

“You need sufficient time and resources for the country program to become effectively embedded within the local policy ecosystem,” Place said. He acknowledged that short donor funding cycles are a complicating factor in providing such support, however, and encouraged all parties to take a longer view on such investments. It can take up to 10 years to get a program property embedded, Hazell said.

Michigan State Professor of International Development David Tschirley stressed the importance of understanding the role a country program plays in the policy ecosystem, and of engaging with the system’s stakeholders to strengthen national capacity in policy research. As this process continues, new questions arise, he noted: “Is it important—if we want to build sustainable capacity—that these country programs become increasingly, eventually completely financed [by host countries] and staffed by local analysts?” 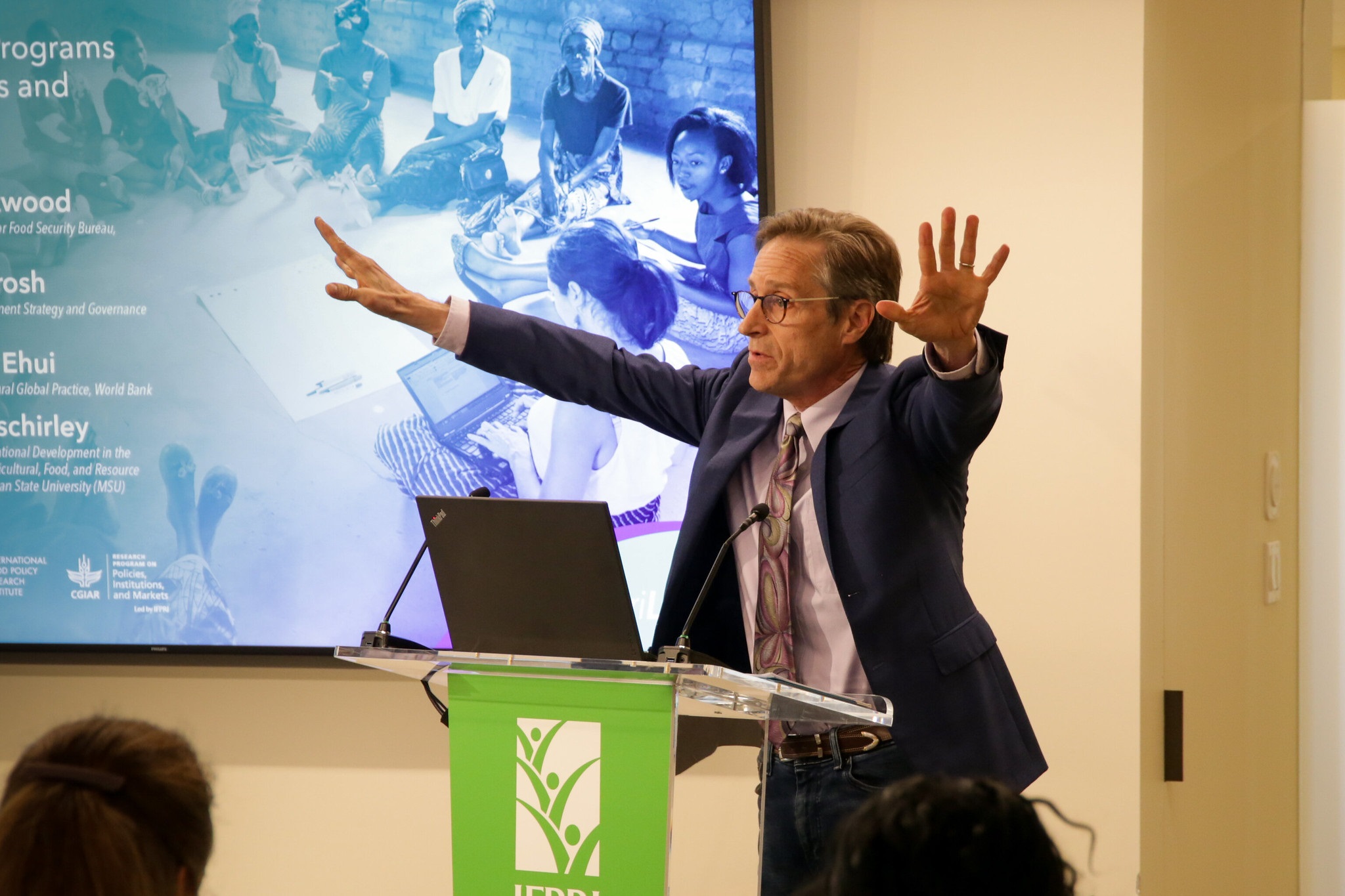 While all speakers generally agreed that a sustained and longer-term approach is necessary for success, several also stressed the challenge in-country programs face in balancing research on longer term solutions against addressing short term issues. “Finding that appropriate balance is crucial for each of the researchers who's in country, and especially for the program leaders,” said Paul Dorosh, director of IFPRI’s Development Strategy and Governance Division.

But that is far from simple. Emphasizing the critical role that building relationships with policymakers has on a program’s success, David Atwood, food policy advisor for USAID’s Food Security Bureau, cautioned against neglecting short term “firefighting”. “One of the essential ways to build trust and credibility is to show the policymakers that you are helping solve their problems, and 90% of those problems demand a solution next week or tomorrow or at 5 p.m. today, rather than a year from now,” he said.

Other challenges country programs face include the changing landscapes of agriculture, food systems, and development approaches. World Bank Director of Agricultural Global Practice Simeon Ehui emphasized the need to address new and emerging issues, and ask questions about the true value research programs can provide. “The question is really, what kind of support can we provide to countries that can make a change?” he said.

Such challenges underscore the difficulty in providing countries development support with in-country programs. But the evaluation points to IFPRI’s successful track record and comparative advantage in doing so.

“It’s this longer-term research … that kind of long-term investment that really seems to pay off for the country programs,” said Place. With this longer view, researchers in country are able to balance longer-term and shorter-term needs, see emerging trends in need of research, and jump in to provide support to policymakers when crises hit.

Qualitative findings are outlined in Place and Hazell 2018. A synthesis report of these studies confirmed the importance of building credibility and trust with key policymakers and the importance of a country program team becoming embedded in the local policy ecosystem.

Watch the video recording of the event here

This post first appeared on the IFPRI Blog. Kathryn Lee is a freelance writer.