COMPLEX BUT ADAPTIVE: A FRESH LOOK AT SMALLHOLDER VALUE CHAINS AND THEIR DEVELOPMENT

“The Value Chain Development approach looks at market dynamics and relationships between the different actors in the chain with the objective of strengthening the whole market system - enterprises, business relationships, financial networks, supporting functions, rules and norms, and the business environment – in a way that ensures greater benefits for the poor from economic growth and development.” (A Rough Guide to Value Chain Development, International Labor Organization (ILO), 2015)

There has been a lot of attention to the value chain development (VCD) approach in programs aimed at poverty reduction and rural development over the past two decades. This has led to production of numerous guides, diagnostic tools, and applications. While offering useful snapshots of current structure and performance, many of these guides fail to account for a highly adaptive and changing nature of smallholder value chains and pay little attention to the dynamic forces affecting these chains or to adaptation. Yet, understanding these dynamics and adaptation is essential for these value chains to remain competitive in turbulent markets.

Some of the crucial factors we need to take into account when analyzing smallholder value chains and their ability to adjust to changes over time include:

Our work on these issues, summarized in this paper, aimed to have a fresh look on value chains involving smallholders from the perspective of complex adaptive systems.

Complex systems share “common properties”, which can provide the building blocks for a conceptual framework for VCD involving smallholders. We identify seven common properties that are most relevant for understanding value chains in which smallholders are important participants: 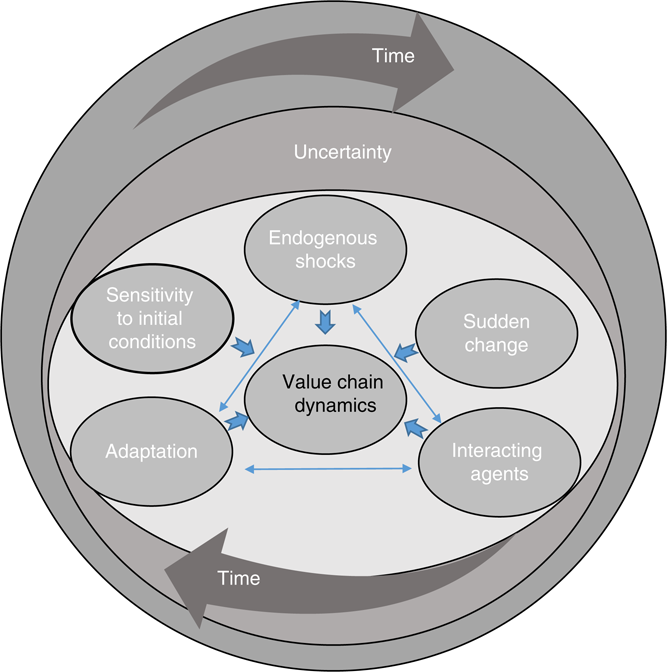 We tried to integrate the common properties of complex adaptive systems into a simple conceptual framework (Fig. 1).

Uncertainty and time – are part of the outer rings to show that they affect the five common properties in the inner ring.

Further, sensitivity to initial conditions, endogenous shocks, sudden change, adaptation, and interacting agents – are placed in a temporal sequence. Sensitivity to initial conditions, shocks, and sudden change are met by responses from agents, which in turn result in adaptations to the system. Feedback loops operate between the five common properties in the inner ring. (To avoid cluttering the diagram, only some of these loops are shown here. Adaptation and interacting agents, for example, can both lead to endogenous shocks.)

We suggest that this framework can have two main applications: to ask new research questions (see table of diagnostic questions) and to analyze case studies (see an example in Box 1).

The special edition in which this framework paper was included also featured three case study articles which applied these concepts: one of high-value cassava in Nigeria, another on sorghum in Kenya, and the last one on taro root in Nicaragua.

The paper “Smallholder value chains as complex adaptive systems: a conceptual framework” (Orr, Donovan and Stoian 2018) was awarded the 2019 Outstanding Paper by the editors of the Journal of Agribusiness in Developing and Emerging Economies, a journal of the Emerald Publishing Group. The paper emerged from research funded by the CGIAR Research Program on Policies, Institutions, and Markets (PIM), which involved economists from ICRISAT, World Agroforestry, and Bioversity International.

This blog originally appeared on the Value Chains knowledge portal, a repository of tools, methods, publications, training content, and other useful information about value chain research undertaken by CGIAR and its partners. The initiative is led by the CGIAR Research Program on Policies, Institutions, and Markets (PIM) with contributions from all CGIAR research centers.