This blog was originally written for Ideas for Africa 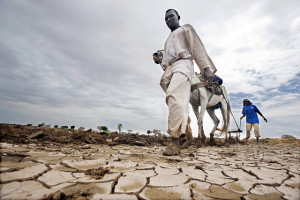 The study presented here sheds new light on the link between the occurrence of weather shocks and violence by looking at the case of Sudan and South Sudan. Using geographically-disaggregated data from 1997 to 2009, it finds that higher temperatures greatly affect the risk of conflict. The analysis also highlights possible channels of the climate-conflict nexus suggesting that competition over natural resources is one of the main drivers in a region where pastoralism constitutes the dominant livelihood.

There has been a growing interest in understanding the ways in which extreme weather events and resource scarcity may trigger conflict. Vulnerability to both climatic and violent shocks varies across the globe and depends on various factors that usually make poor areas more likely to be affected. The Horn of Africa -the region in Sub-Saharan Africa (SSA) with the largest concentration of pastoralists- is extremely vulnerable. This part of the African continent has experienced high conflict levels and it is prone to climatic fluctuations that can have dramatic consequences on its rural population.

In order to provide more concrete policy directions, the relationship between weather and violence needs to be better understood by embracing shorter time intervals and subnational regions and by narrowing down the number of competing hypotheses to explain the mechanisms of the relationship. The paper summarised here covers these gaps through an analysis at the grid-cell level, where grid-cells are defined as squared regions of 50km x 50km. Using data for each cell of Sudan and for each quarter from 1997 until 2009, the study tests whether regions in which temperatures are exceptionally high (or low) relative to the historical norm within the region are more likely to experience violence (a so-called fixed effects framework). Weather data come from the University of East Anglia’s Climatic Research Unit Time Series dataset and data on violence come from the Armed Conflict Location and Event Dataset (ACLED) developed by PRIO.

Temperature anomalies strongly affect the risk of conflict. The study finds that temperature anomalies significantly increase the occurrence of violent events, which comprise battle and violence against civilians. Specifically, a one standard deviation change in temperature translates into a 31 percent increase in the frequency of violence. While the magnitude of this increase is in the range found in comparable studies, the effect size is larger than the average effect found in the literature probably due to the higher vulnerability of Eastern Africa to warming.

The risk of conflict is magnified by the presence of pastoral and agro-pastoral groups. The analysis further explores the relationship between climate and conflict by looking at how the strength of the relationship varies among different regions. Exploiting such heterogeneity, the study identifies mitigating and exacerbating factors of the impact of weather shocks on violence. Usually, the worst effect of climate change on African economies relates to decreased crop yields. The literature links this negative impact to the relative change in income and in the opportunity cost of participating in violence. In Sudan, however, these crops do not appear to be an important exacerbating factor as the production of millet, one of Sudan’s main food crop, seems to have a mitigating impact. On the contrary, in Sudan, competition over natural resources between herders and farmers has been hypothesised as a major mechanism behind violence. Such mechanism is likely to be more prominent in areas with higher presence of pastoralist communities. In accordance with this view and the importance of livestock for rural livelihoods in Sudan, livestock density or the presence of pastoral and agro-pastoral ethnic groups constitute a significant exacerbating factor.

The risk of conflict is mitigated by water availability and access to markets. A mitigating role is found for water availability (proxied by being near to a major river). This is not surprising, in particular in arid and semi-arid areas where shocks to the limited amount of water have been reported to generate conflict about property rights and competition between pastoralists and farmers. The impact of weather shocks on conflict is mitigated also by road access and being close to a city. In fact, access to a city’s market can help herders smooth the impact of weather shocks by selling and buying livestock before and after droughts.

The analysis summarised here sheds light on the importance of enhancing resilience to weather shocks in East Africa, in particular in pastoralist regions, and therefore calls for more decisive and coordinated policies to help herders cope with shocks. Recent evidence suggests that the traditional coping strategies of pastoralists are progressively breaking down due to a confluence of mutually reinforcing factors, such as population growth, fragmentation of grazing land, new droughts, and desertification. Such scenario depicts a particularly grim future for the 15-20 million pastoralists of the Horn of Africa. The results on the security consequences of the vulnerability of these areas make action even more urgent. The literature in the field suggests not only improving the resilience of the livestock sector through improved provision of emergency feed and better access to water and markets, but also fostering income diversification –especially through education investments.

or the relative forthcoming article: Maystadt, J.F., M. Calderone, and L. You. 2014. Local Warming and Violent Conflict in North and South Sudan. Journal of Economic Geography

Margherita Calderone is a Consultant in the Human Development sector of the World Bank working at the headquarters in Washington DC. She is also a PhD candidate in Economics at Humboldt University, graduating Fall 2014. Her PhD was funded by a Marie Curie scholarship from the European Union. Her research interests include: Conflict Economics, Vulnerability to Shocks, Household Behavior, and Experiments in Development Economics. Prior to joining the World Bank, she was a Research Associate at the German Institute for Economic Research (DIW Berlin), a Visiting Fellow at the International Food Policy Research Institute (IFPRI), and a Consultant at the Inter-American Development Bank (IDB). She holds a Master of Science in Economics from Bocconi University.