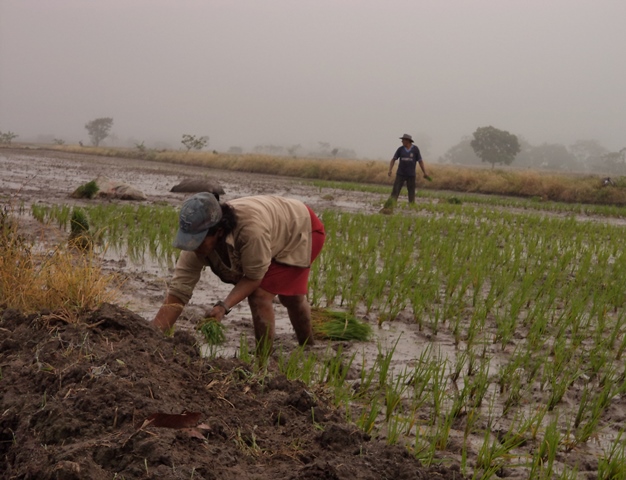 This seemingly straightforward question is quite difficult to answer.  On smallholder farms, all family members generally play important roles in agricultural production.  But farm surveys typically interview men under the assumption that men are the household head, landholders, and farmers (see Deere, Alvarado, and Twyman 2012). This implicitly implies that women are not considered farmers, reinforcing the idea that women play a minimal part in agricultural production. Furthermore, some crops like rice are often viewed as a male dominated production activity. However, little empirical evidence exists about women’s roles in the rice sector in Latin America.

Gender researchers at CIAT set out to identify the proportion of female rice farmers and the constraints they face compared to their male counterparts. Knowing that women in male-headed households -- or dual-headed households -- are often overlooked because of implicit bias in agricultural surveys (see Deere, Alvarado, and Twyman 2012 and Twyman, Useche and Deere, 2015), we decided to also document the roles both women and men in rice producing households play in rice production.

To date we have implemented surveys in Peru, Bolivia, and Ecuador to both understand gender roles in rice production and to assess the adoption of improved rice varieties.  We sought to interview women who were identified as rice farmers and those living in rice producing households.

The challenges of recognizing women as rice farmers

In Peru we used lists of irrigation cooperative members to identify rice farmers. About 22% of the farmers on the lists were women and the initial random sample included a similar proportion of women. However, during survey implementation, community leaders informed enumerators that most of the women who had been selected were not rice farmers and they were replaced by male rice farmers. This raises the question of what a rice farmer is. Were the women eliminated from the sample as a result of perceptions that rice farming is a male-dominated activity and therefore not perceived as farmers by community members (or by enumerators and researchers who did not question this)?  Or, do women not participate much in rice production activities? 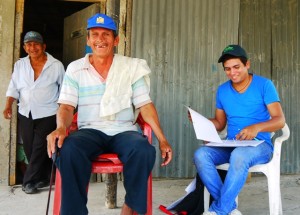 In the end, 15% of the interviews were conducted with women and most of these were in female headed households. Overall, thinking about other potential definitions of a rice farmer (in terms of landowners and/or managers), we find that women in 23% of households have property rights, and women are participating in management of at least one rice plot in 19% of the households.  Both of these suggest that 15% is an under-estimation of the proportion of women rice farmers.

Based on these experiences, we decided to over-sample women rice farmers in Ecuador to ensure that at least 25% of the sample were women. Our goal was to conduct statistically valid comparisons of yields and improved rice variety adoption between male and female farmers. These efforts included fieldwork by a gender researcher who actively sought out female rice farmers and taught enumerators to do the same.  Unfortunately, preliminary results indicate that only about 10% of the interviews were conducted with women.

In all three countries, we had hoped to identify whether or not there were gender differences in production and adoption and, if so, why.  Simple t-statistics indicate that there are slight differences in yields; women produce about 4.5% less than men in Peru. However, regression analyses to identify the potential causes of such differences are not possible given the low number of women in the sample.

Depending on how we define “rice farmer,” we might find that more women should be included in our sample. 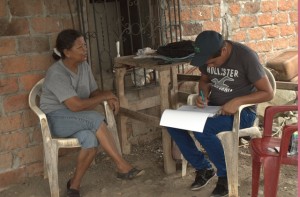 That being said, we did find that women contribute in varied ways to rice production.  For example, in Peru, women represent approximately 31% of hired labor. They also contribute to unpaid family labor. Among households that use unpaid family labor (97% in Peru and 76% in Bolivia), approximately 53% in Peru and 40% in Bolivia have women participating in agronomic activities. In Bolivia we find that women are especially active in land preparation (28% households), weed control (25%), and harvesting (43%). Thus, depending on how we define “rice farmer,” we might find that more women should be included in our sample.

Furthermore, preliminary results from qualitative research in Ecuador indicate that women provide labor, supervise hired labor, transport supplies, and make joint decisions regarding rice production. Such qualitative research can also build women’s awareness of their own contributions to agricultural production. One woman commented at the end of the interview, “I do more activities related to rice production than I realized.”

One woman commented at the end of the interview, “I do more activities related to rice production than I realized.”

So, to answer the initial question about whether women in Latin America are rice farmers, we have to decide how we are defining farmers (see also Doss and Morris 2001). If we use the common perception of rice farmer, few women in Latin America are considered rice farmers. However, if we broaden our definition to include family and hired laborers, supervisors, decision-makers, and allow for more than one farmer in a household, many women would be considered rice farmers. We will miss lots of women’s activities if we don’t go beyond the common perceptions of who is considered to be a farmer.

Doss, Cheryl R., and Michael L. Morris. 2001. “How Does Gender Affect the Adoption of Agricultural Innovations? The Case of Improved Maize Technology in Ghana.” Agricultural Economics 25 (1): 27–39.

Jennifer Twyman is an agricultural economist, working as a Gender Research Scientist at CIAT in Cali, Colombia. Her research focus is on gender, agriculture, and climate change within the CGIAR Research Program (CRP) on Climate Change, Agriculture, and Food Security (CCAFS); but she is also involved in other CRPs, including the Global Rice Science Partnership (GRiSP), which supported the research upon which this blog post is based.  She is currently conducting research regarding gender differences in the vulnerabilities to climate change and appropriate adaptation strategies. Her research interests include understanding women’s roles in smallholder agriculture systems and the role of asset ownership for intra-household bargaining power.

María Alejandra García is a sociologist, working as a Gender Research Assistant at CIAT in Cali, Colombia. Her research focus is on gender and agriculture, specifically in the rice sector in Latin America within the CGIAR Global Rice Science Partnership (GRiSP). Currently she is involved in projects related to the adoption of improved rice varieties with a gender perspective, with the purpose of documenting gender roles.

Juliana Muriel is an economist, working as a research assistant at CIAT in Cali, Colombia. Her research focus is on agriculture and sustainable rural development. She has research experience in topics related to evaluations of adoption of agricultural technologies, yield gaps and gender in agricultural production and climate change. She also has experience in quantitative and qualitative data collection through fieldwork, surveys and participatory workshops and currently she is supporting research regarding gender differences in the perceptions, vulnerabilities, and capacities of men and women to confront climate change.