Africa’s youth employment issue is fundamentally one of agricultural modernization and investment in science. Farming remains the dominant occupation of most young Africans; this despite the fact that few respond “I want to be a farmer” when asked about their aspirations. More youths remain on farms than leave, although the movement away is very visible and has raised concern about food security, aging of the countryside, and excessive dependence on food imports. Concerns would be best directed toward understanding the needs of young people who stay on farms, already a large group that will grow as the global slowdown and attenuation of the commodity boom affect the continent. The agriculture that will allow young farmers to prosper will have to draw on the best of modern agricultural science—and at present it does not. 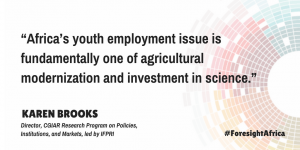 Current levels of investment in Africa’s agricultural science cannot support modernization. The prevailing paradigm of “closing yield gaps” has created the erroneous view that known science can be applied to great effect without investing in new science. Across the subcontinent, although investment in agricultural research has grown in real terms since 2000, it has declined as a share of agricultural GDP. Spending on agricultural research in Africa south of the Sahara in proportion to the size of the agricultural sector is about half that in Latin America and the Caribbean. At a time when social media vastly improves the capacity of young people to communicate even in remote rural areas, the absence of vibrant scientific communities weakens the attitudinal foundation supporting innovation. Even the improved varieties that advanced farmers seek may be a decade or more old. Today’s pests and diseases and erratic weather patterns overtake yesterday’s new varieties. Science that does not keep up falls behind.

Science that does keep up can deliver. Over 200 new bean varieties have been developed and released through the PanAfrican Bean Research Alliance (PABRA), a consortium of 29 bean-producing countries in Africa led by the International Center for Tropical Agriculture (CIAT). These new varieties are helping to transform beans from a subsistence food to a marketed crop that boosts nutrition. Over 60 new varieties of orange sweet potato with enhanced vitamin A have been released in 15 countries of Africa over the past decade and a half, reducing the vitamin A deficiency of millions. A new program on African Chicken Genetic Gains (ACGG) led by the International Livestock Research Institute (ILRI) in partnerships with the governments of Ethiopia, Nigeria, and Tanzania is producing a better backyard chicken for smallholder farmers. These and other efforts to strengthen the scientific foundations of Africa’s agriculture are essential for creating the jobs that will employ ambitious and hopeful young people. Some entrants to the labor force should become scientists, and millions of others should be beneficiaries of science through advances in soil management, greenhouse gas mitigation, better breeds and seeds, improved management of pests and diseases, rapid response to biotic shocks, and the myriad other ways in which advanced science serves agriculture.