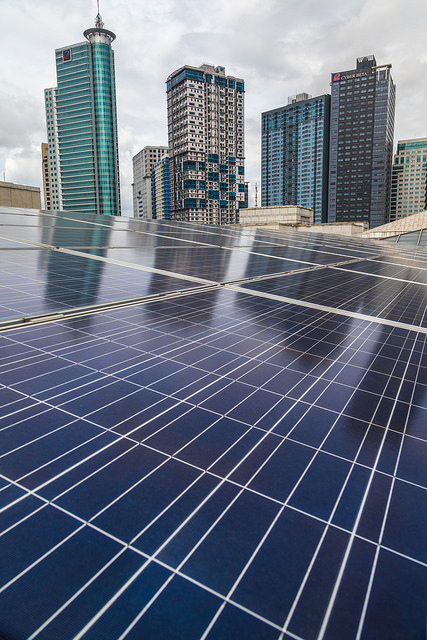 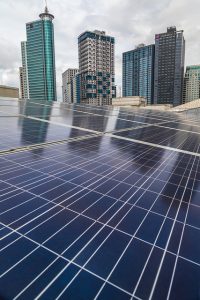 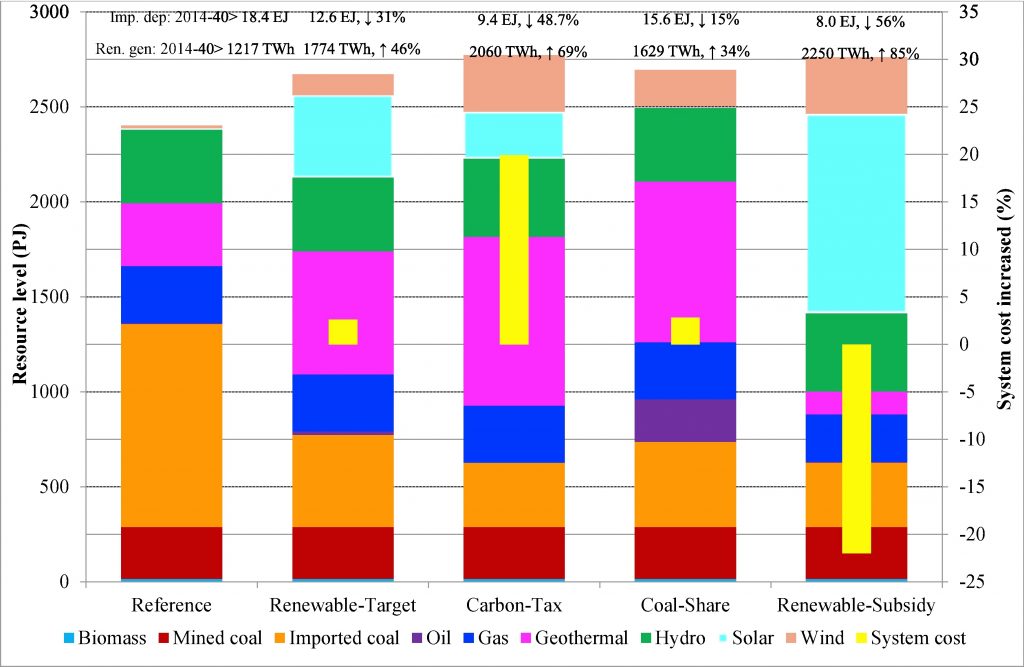 Primary energy supply-mix in 2040 and percentage change of total system cost (2014–2040). Figure also demonstrates the amount of cumulative imported energy and renewable-based generation, including the percentage change compared to the reference scenario.

"The model suggests that the current energy supply-mix must be diversified to minimize import dependency on fossil fuels. Solar PV, wind, and conventional renewable technologies play an important role in contributing to power generation. The cost of promoting renewable energy technologies to reach the renewable targets and coal shares set forth in the policy goals is reasonable. The total system cost during the modeling period (2014–2040) increases by 2.6% in the renewable-target scenario and 2.9% in the coal-share scenario compared to the reference scenario cost of US$69.7 billion. The additional goals of energy security and GHG mitigation would also be achieved. The total system cost increases by about 19.9% in the carbon-tax scenario and decreases by 22.5% in the renewable-subsidy scenario. The government of the Philippines could impose a carbon tax on fossil-fuel use to encourage clean energy use and raise funds for the promotion of renewable energy technologies. Optimization results show that 20–30% of the existing FiT or subsidies on renewable energy would help to promote renewable technologies and reduce 22.5% of total system cost.

The optimal energy supply-mix and technologies selected by the model in all alternative policy scenarios would allow the Philippines to meet their own sustainable energy development goals as well as the INDC mitigation target. Accelerated development of the renewable energy scenario does not have huge additional cost implications, considering that the long-run investment cost of these technologies is expected to decrease rapidly. In this renewables target scenario, import dependency and GHG emissions drop significantly when compared to the reference scenario. The mitigation cost of CO2 emissions is about US$3.5/ton in the renewables-target scenario, which is below typical costs in developed countries. Therefore, it is attractive to the private sector for clean development mechanism (CDM) projects and also for developed countries to invest in renewable energy technologies in the Philippines—to reduce their own committed CO2 emissions. All alternative policy scenarios show that the Philippines could promote renewable energy technologies for power generation to diversify the energy supply-mix, improve its energy security, and develop a low-carbon society.

To achieve these promising goals, however, the Philippines needs a vision and strong policy support. In addition to this energy assessment, it is necessary to assess the trade-offs across other sectors from investment in sustainable energy. This energy assessment also requires strong links across other sectors of the Philippine economy in order to identify and define the impacts of alternative energy development strategies. Future steps involve linking this bottom-up energy modeling approach with a top-down national computable general equilibrium model. Such a study is already planned.”

This research was supported by the CGIAR Research Programs on Policies, Institutions, and Markets (PIM), Water, Land and Ecosystems (WLE), and Climate Change, Agriculture and Food Security (CCAFS).