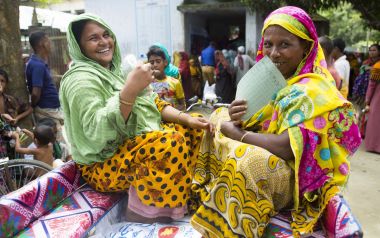 A BUREAUCRATIC CATCH-22: STUDY IN BANGLADESH SHOWS HOW SAFETY NETS CAN OVERLOOK THE POOREST

Around the world, governments and development partners make hard choices on how to invest their limited resources to help the needy. But in a country like Bangladesh, where almost one fourth of the population of 165 million lives below the poverty line, identifying who should receive assistance is especially challenging—and if agencies do not employ sound targeting practices, many needy people may fall through the safety net.

Faulty safety net targeting has serious costs. For governments, funds fail to reach some of the most deprived. Poor households arbitrarily excluded lose an important source of income and may miss critical opportunities that assistance makes possible: Access to improved education and water and sanitation infrastructure, and the ability to take risks that may have big payoffs, such as starting up a business or adopting new agricultural technologies. 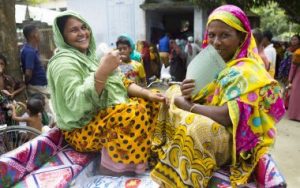 The government launched VGD in 1975 to help rural women climb out of poverty. Although VGD is a nationwide program, more resources are first concentrated in food-insecure sub-districts. Then, local selection committees identify poor women at the subdistrict-level following the prescribed targeting criteria. Today, VGD reaches up to 750,000 women directly and their 3.75 million family members each year. The program is aimed exclusively at the poorest rural households—but in 2015, only 43 percent of recipients actually came from the poorest 20 percent and 71 percent from the poorest 40 percent of all rural households.

How does a safety net meant for the most vulnerable exclude some of the poorest?

IFPRI analyzed the effectiveness of the current VGD beneficiary selection criteria to diagnose the targeting issues. All criteria are well-intentioned, but many are impractical and ineffective in correctly identifying the poorest because they are not observable, verifiable, or linked with poverty.

For example, households were eligible if “functionally landless with no owned land or with owned land less than 0.15 acres.” But no mechanism exists to verify this, and it’s unclear whether landless would include homestead land.

Another faulty criterion fails to account for an important gender issue. VGD selects female-headed households with no earning adult male or with no other source of income. In other countries, female-headed households are thought to be consistently linked with poverty. But in Bangladesh, around 30 percent of them are among the most well-off households, mostly because they receive income from household members such as a husband, son, or daughter who migrated either to cities within Bangladesh or abroad.

We see a catch-22 in VGD’s targeting: Some women who are better off have been unintentionally included. At the same time, because the program fails to account for the complex, multi-dimensional nature of poverty, many of the neediest don’t meet any of its criteria and fail to qualify for assistance they should be receiving.

To improve VGD’s targeting effectiveness for the next program cycle, IFPRI researchers had to act quickly. IFPRI formulated five promising new targeting criteria using data from its own nationally representative rural household surveys—the most comprehensive panel dataset in the country. They are highly linked with poverty, are observable, and verifiable. For a comparison with the old criteria, see the chart below:

*Government did not accept this criterion.

By choosing better indicators of household welfare and using them as selection criteria, it is possible to greatly improve the targeting effectiveness of the VGD program. Within one month of receiving the evaluation, the Bangladesh government accepted most of IFPRI’s recommended criteria. They will be used to guide beneficiary selection starting the next two-year program cycle, which will begin on January 1, 2019. The government’s rapid policy uptake shows its commitment to serving the neediest, and the power of placing timely, implementable recommendations directly in the hands of policymakers.

The VGD Program assessment study was funded by the United States Agency for International Development (USAID) through the Policy Research and Strategy Support Program (PRSSP) in Bangladesh under USAID Grant Number EEM-G-00-04-00013-00. It was also supported by the CGIAR Research Program on Policies, Institutions, and Markets (PIM) led by IFPRI.