This year's World Commons Week (October 6th-12th) organized by The International Association for the Study of the Commons (IASC) strives to celebrate and draw attention to commons research and practice and devote a week toward promoting local-to-global events.

It is the second annual WCW global event, following a successful introduction in October 2018. This year, the organizers are focusing on two primary activities: (1) Local Events; and (2) Global Keynote Webinars. PIM colleague Iliana Monterroso (CIFOR) will give a Global Keynote Webinar on Latin America on Friday, October 11.

How tenure reform processes can lead to improved governance of indigenous commons: Experiences from Latin America

Common pool resource systems play a key role in sustaining the livelihoods of forest dependent communities. Globally, communities and indigenous peoples are estimated to hold as much as 65% of the available land under customary tenure but only 18% of this land has been formally recognized either as owned or designated for the use for indigenous peoples (RRI, 2015). Latin America has witnessed widespread policy reform, which has changed regulations that redefined tenure rights around forest lands (Roldan, 2004). As of 2015 nearly 33% of forests in the region were under some type of collective tenure regime owned by communities, most of which are of indigenous peoples, and another 6% was designed for their use.  In Latin America, recognition of indigenous commons is the result of social movements in which indigenous peoples struggle for land and resources and pressure governments to recognize their rights, a process that has had significant influence on environmental governance (Roldan, 2004). In fact, in several Latin American countries, a large proportion of national territory has been formally recognized as either designated for or owned by indigenous groups and local communities, including Mexico (52%), Peru (35%), Colombia (34%), Brazil (23%) and Nicaragua (28%) (RRI, 2015; IBC, 2016; Larson et al. 2016; Herrera, 2017). This webinar will draw results on extensive research analyzing how reform around recognition collective rights can lead to improved governance of indigenous commons.  It will assess the progress and discuss challenges and opportunities to promote management systems that sustain outcomes on livelihoods and tenure security at the local level. 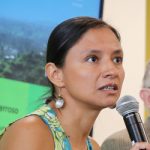 Iliana Monterroso is an environmental scientist with the Equity, Gender, Justice & Tenures team with the Center for International Forestry Research (CIFOR). She co-coordinates Gender and Social Inclusion Research. Iliana has a BSc in Biology and an MSc and PhD in Environmental Sciences. She has participated in global comparative studies that analyzed forest tenure reforms around collectives. Her research focuses on gender, tenure, collective rights, environmental governance and socio-environmental conflicts predominantly in Latin America.