Climate change poses a significant threat to livelihoods of rural communities around the world. A key policy challenge is increasing the resilience of smallholder farmers while sustainably intensifying production. Adopting conservation agriculture (CA) techniques is argued to achieve this combination: By boosting water and nutrient retention in soil it mitigates losses from poor rainfall, while causing soil health to improve over time, increasing yields. However, because these yield improvements occur slowly, they can take a long time to pay off—a decade on average, according to one review.

This long timespan poses problems for both farmers and for researchers trying to better understand the dynamics of CA adoption.

For farmers, the challenge is that realizing benefits takes years, but the costs are immediate. They must invest time in learning and applying new techniques, and use more labor or inputs for weeding. Since some benefits are in the form of public goods (such as reduced soil erosion) subsidies could be an appropriate policy to help tide farmers over until private gains are realized. For researchers it is inherently difficult to conduct an experiment that may require many years before the full impacts can be evaluated. As a result, there is a lack of experimental evidence available to show whether CA programs can deliver benefits to smallholder farmers in developing countries.

In our recent discussion paper, we attempt to address both challenges. To promote CA adoption, we propose a subsidy payment for a fixed time during the initial years of adoption, with the aim of enabling farmers to overcome the initial cost barrier and getting them close to the point where adoption begins to yield personal gains. We conducted an experiment that showed the potential efficacy of this approach.

Rather than setting up a long-term randomized control trial, we first evaluate the subsidy mechanism using a framed field experiment. To do this, we partnered with Innovations for Poverty Action to conduct sessions with 1,400 smallholder farmers in northern Ghana. In a one-hour experiment, each farmer was asked to choose between CA practices and conventional techniques over ten rounds, each representing an agricultural season. Participants’ choices were incentivized: They received a real payment for each round depending on the choice they made. They were thus likely to make choices based on what they thought would bring them the highest payout, rather than what they thought the “correct” answer was. Payments were set up to mirror the hypothesized payoff structure of CA versus conventional practices—in other words, higher immediate costs but greater long-term benefits from CA—and by a randomly determined rainfall realization (reflecting CA’s better resilience in seasons with poor precipitation).

Participating farmers were randomized so that some received an additional incentive payment for each of the first four rounds if they chose CA. We find that these farmers unsurprisingly adopt CA in the rounds in which the subsidy is present, but also continue to adopt CA at higher rates (86% vs 78%) even after the subsidy is withdrawn (see figure). Incentivized farmers were also more likely to sustain continuous adoption of CA throughout the experiment and less likely to abandon it. 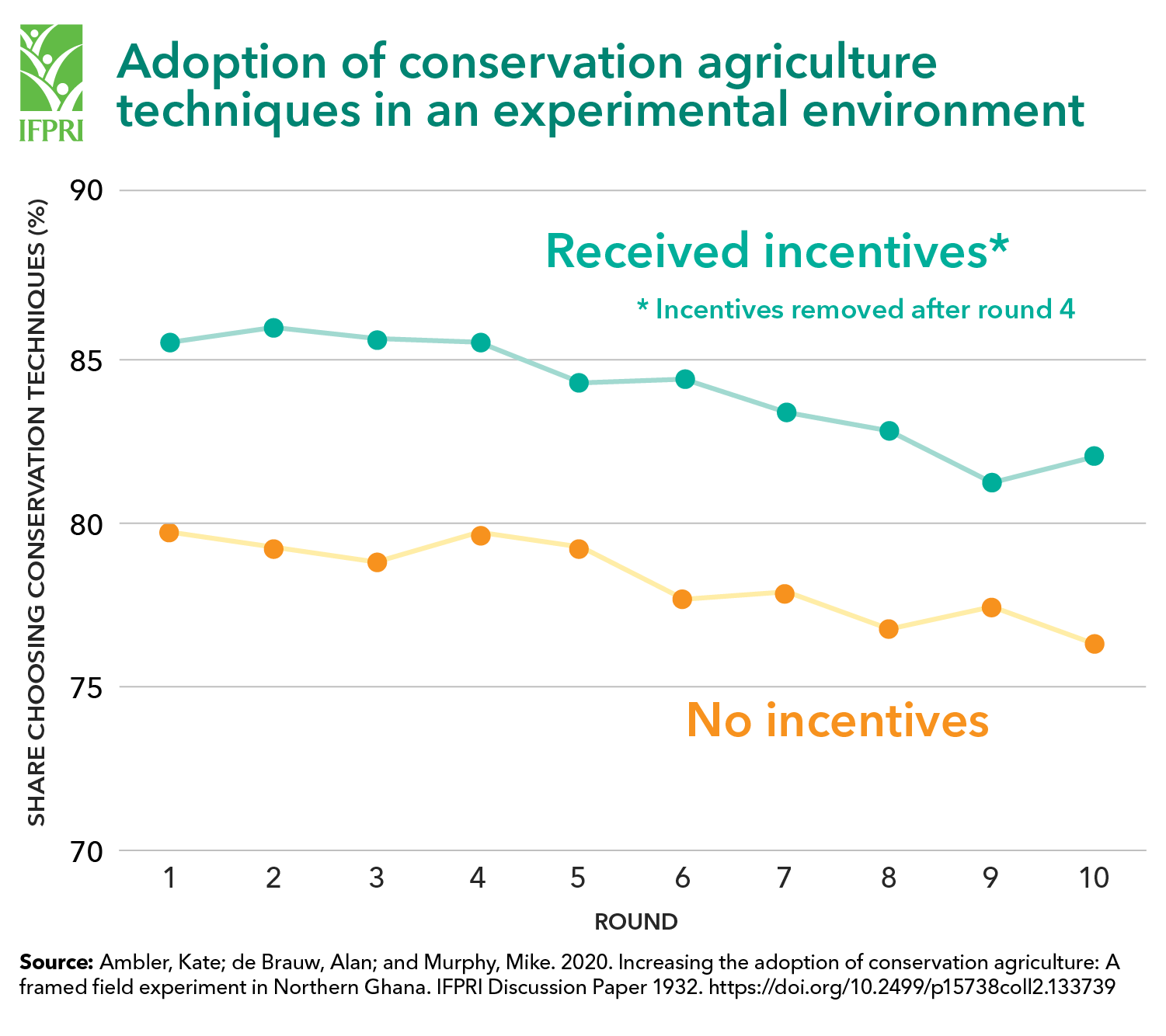 Our results show that a subsidy encourages farmers to adopt CA in an experimental setting, even when there is a gap between the phase-out of the subsidy and the point at which benefits can be realized.

In a separate overlapping treatment used to evaluate the influence of information about peers’ adoption decisions, randomly selected farmers were read a vignette about a neighbor’s adoption decision in each of the initial four rounds. These results are not as strong, but we do find some evidence that being told about long-term adoption of CA by a neighbor makes respondents more likely to choose CA.

The key question is whether the findings from our lab-in-the-field experiment hold in a real policy setting. While there is a large literature around the agronomic returns to CA adoption, and correlations between adoption and farmer characteristics, to our knowledge there is only one study (currently ongoing) that looks at causal pathways for CA adoption. There is a pressing need for greater funding of long-run experiments to rigorously evaluate the benefits of CA techniques (and agro-ecological approaches to poverty reduction more generally) in real world settings.

This post is based on research that is not yet peer-reviewed. This project was funded by 3ie and the IFPRI-led CGIAR Research Program on Policies, Institutions, and Markets (PIM).