Rural nonfarm enterprises (NFEs) can provide a variety of benefits to their owners’ households. Earning income off the farm can help rural households to diversify risk and smooth seasonal income earnings, contributing to both employment and rural income growth (Haggblade et al., 2010). NFEs are a crucial part of the economy in Papua New Guinea (PNG)’s rural areas, where climate shocks and natural disasters are not uncommon, and where more than 80% of the population lives, most practicing subsistence agriculture.

Our new research, recently published in Food Policy, suggests an additional benefit: That non-farm enterprise ownership is associated with improved diet outcomes, though these results vary by NFE ownership type.

Using the 2018 Papua New Guinea Household Survey on Food Systems, which surveyed 1,026 households across four rural areas, we investigate the impact of owning a NFE on a variety of household welfare outcomes. Overall, more than one third of households in the survey owned a NFE—a far greater proportion than that of those who supplemented their farm income with wage work (9%). We split households into those that reported a male-owned NFE (31%), female-owned (25%), or jointly-owned (44%).

The reported business type varied notably depending on the gender of the owner (Figure 1). For instance, while nonagricultural trade (in the three shades of blue) constituted the most common business type across all ownership categories, prepared food enterprises predominated among women, while men were more likely to engage in other forms of nonagricultural trade. We find that businesses with the highest median yearly incomes—transportation (5,000 Kina or $1410), cash crops (3,000 Kina or $850), and other services which is mostly construction and carpentry (1,900 Kina or $540)—are more likely to be male- or jointly-owned. 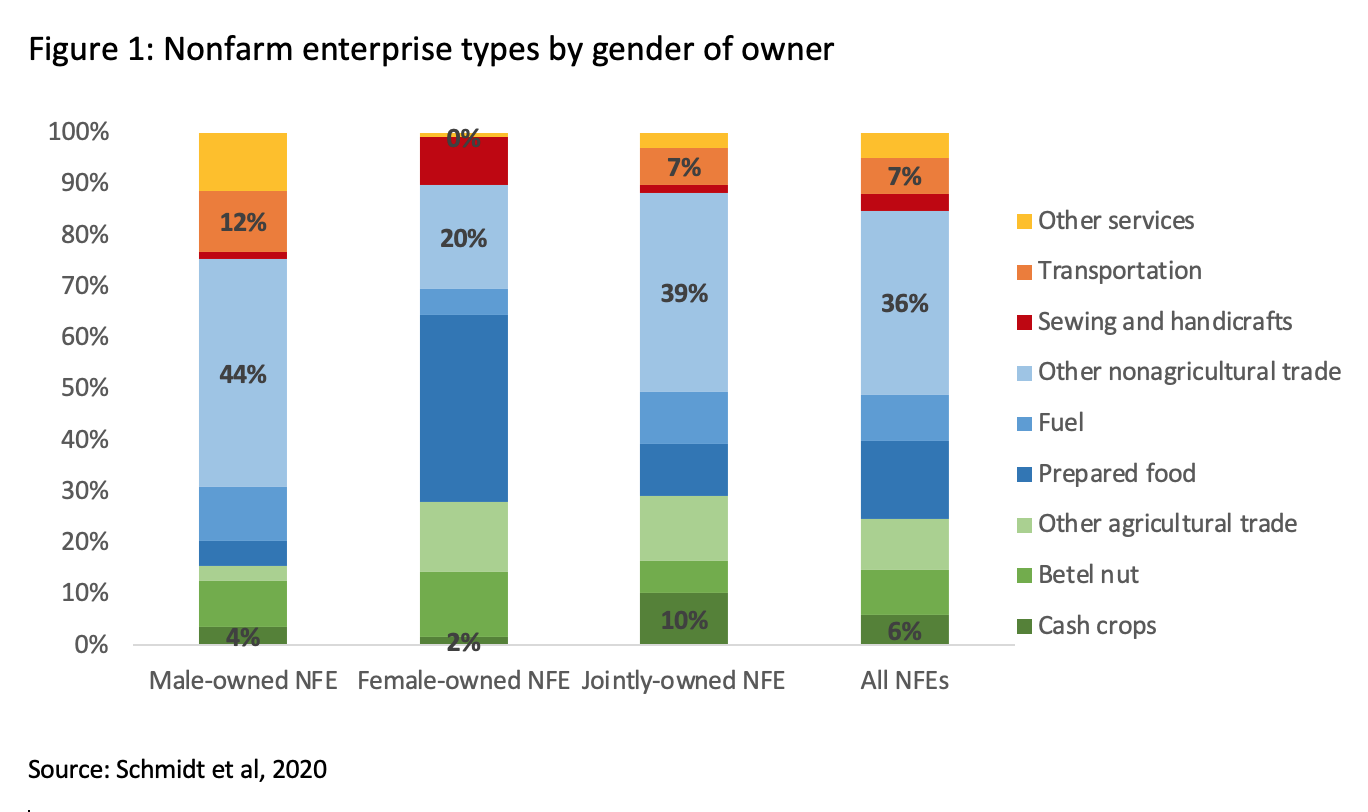 In contrast, we find that price fluctuation risk is significantly associated with a household having a female-owned NFE, suggesting that female-owned businesses may be created as a labor diversification strategy following shocks to better manage risks to household welfare. In addition, households in communities with more vibrant NFE activity are much more likely to have female-owned NFEs, suggesting that NFE clusters are important to female ownership, possibly due to their positive externalities of improved security, lower perceived risk, and lower transaction costs.

Next, we use nearest neighbor matching (NNM) to assess the impact that owning a NFE has on household welfare. Compared to households without a NFE, we find that households with NFEs have significantly improved consumption expenditure outcomes. Evaluating these welfare outcomes by NFE ownership type, we find that improved dietary outcomes are mainly driven by households with jointly-owned NFEs, which consume 13g (33%) more protein per person per day and have increased dietary diversity by 0.8 points (16%) on a 16-point scale (Table 1). Households with male-owned NFEs have greater total expenditures compared to households without an NFE; however, these increases in income do not translate into greater protein consumption or increased dietary diversity.

Overall, female-owned NFEs do not have any significant impact on household welfare. There are several possible reasons for this. As the multinomial logit results suggest, female-owned NFEs are more common among households that have experienced a price fluctuation shock. This may point to work by Porter (2012) showing that households that diversify income sources in an environment prone to climate shocks are better able to balance out crop income losses. In addition, in focus groups conducted in the survey area, women and girls reported that it was difficult to earn sufficient income from their NFE activities, reflecting the survey data on activity type and related NFE incomes by ownership reported in Figure 1.

Overall, we find that NFEs have important household food consumption outcomes in rural PNG, especially male- and jointly-owned NFEs. Although households with female-owned NFEs do not experience improved welfare, the results suggest that these NFEs are still very valuable as a risk diversification strategy. Policies to promote small nonfarm businesses, such as improved access to credit and improved marketing and transportation infrastructure, could increase incomes, reduce risk of food insecurity, and improve consumption among rural households in PNG. However, it is important to design these interventions in a manner that considers the gender dynamics of households and the labor market.

Gracie Rosenbach is a Country Program Manager with IFPRI’s Development Strategy and Governance Division (DSGD); Emily Schmidt is a DSGD Research Fellow. This work was supported by the Australia Department of Foreign Affairs and Trade (DFAT) and the IFPRI-led CGIAR Research Program on Policies, Institutions, and Markets (PIM). This research forms part of the PIM's Flagship 2: Economywide Factors Affecting Agricultural Growth and Rural Transformation.