UNRAVELING POWER-PLAY IN LAND USE PLANNING

Land can have multiple uses with complicated, often contentious, overlapping boundaries. A forest can be the site of agricultural production, while a wetland can provide valuable nutrition in the form of aquatic protein.

So what happens when multiple players are vying for land and its various uses, while continuously contesting the overlapping boundaries?

Land use planning as a technical tool: a realistic approach?

Land use planning at the national level in Lao PDR is meant to be a technical way of dealing with competition over land. Various government ministries work together to divide up the land mass of the nation in a way that, at first glance, might seem a-political and neutral.

However, if you glance under the surface, a very different picture begins to emerge. The reality is that there is a great deal of competition for how much land is used for a specific purpose.

For example: the Department of Forestry has a development target that states that 70% of the country must be forested, while the Department of Agricultural Land Management within the Ministry of Agriculture and Forestry has a target of 4.5 million hectares of agricultural land, or about 20% of the country’s land area. If these two goals alone were to be met, there would only be 10% left for all other uses, including but not limited to infrastructure, urban areas, mining, hydropower, defense, and manufacturing.

This is of course unrealistic. Logically, there must be some overlap between these various land uses OR these targets are not being met and there is significant competition between government players, even from departments within the same ministry.

Even if you zoom into the village level, there is significant competition for land use. For example, in areas that have been resettled with those displaced by hydropower or mining projects, there is a power struggle between the original inhabitants of the land and those who have come later. Imposing land use quotas on these individuals isn’t going to change these power dynamics and, without providing incentives for those who are currently controlling the land to relinquish that power, land use changes will be impossible to implement.

All of these issues, from the national level to the local level, show that land tenure and land use planning are arenas of significant power struggles. Without having the political influence to change national land use targets, or without being connected to the right family in the village, there is no reasonable way to exert influence over the way land is used. Land use planning processes, like most things, are embedded in existing power structures and relationships.

Putting the focus on power and politics

So how can these various power dynamics be brought into a conversation about land use planning? And how can decisions be made in a way that acknowledges the competition for land without creating the kind of political and social rifts associated with conflict?

Researchers from WLE and PIM have developed a board game that could facilitate a dialogue and decision making process for land use planning. The game, called Rule All, was launched at the WLE Greater Mekong Forum on Water, Food and Energy in 2017 in Yangon and was trialed with participants from international organizations, as well as stakeholders from Myanmar, Thailand, China, Vietnam and Lao PDR. 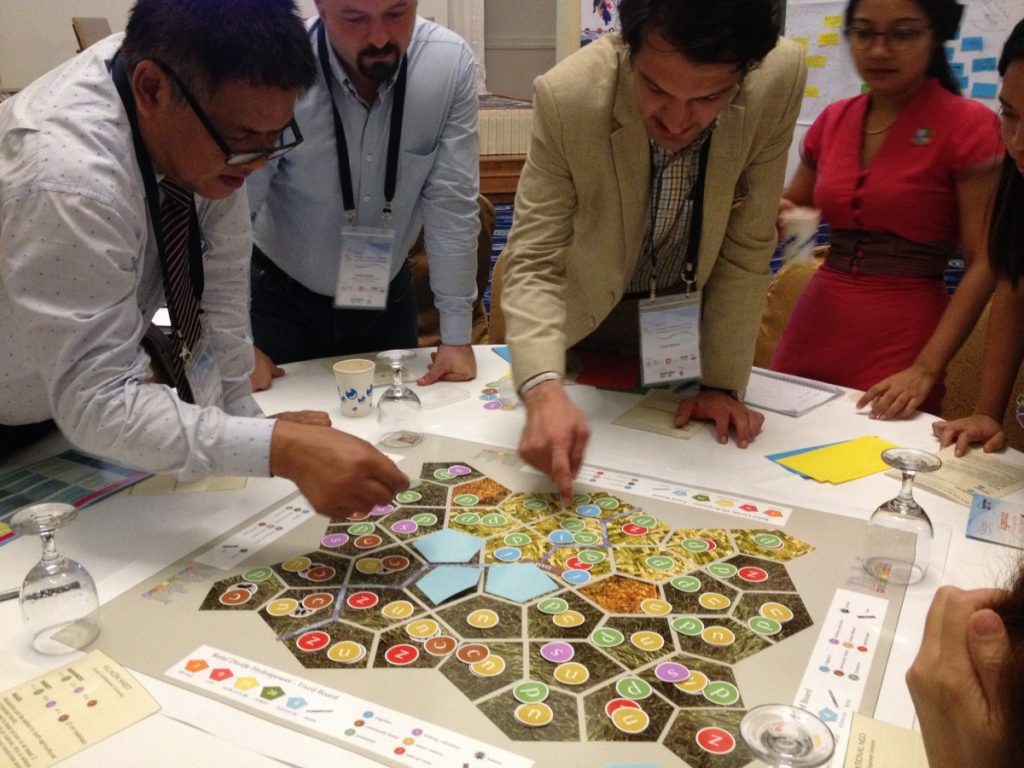 The game assigns roles such as farmer, department of forestry, department of agriculture, department of water resources, department of land, or land cadastre to each of the players. These roles come with their own development agendas and targets that players are encouraged to reach – for instance, a certain number of plots for forest, agricultural land, or dams – preferably through negotiations during the game. The more of these specific interests players succeed in achieving, be they personal or institutional, the higher their final score will be.

What ensues is rigorous discussion in which people use various strategies to try and exert influence over the way the board will look at the end of the planning process. The players quickly realize that, while there are some individuals with whom their interests align, the majority of the other participants are vying for land use plans that are in direct conflict with their goals.

Realizing that all of their objectives probably won’t be met, the players start to cut deals. If you let me put a hydropower dam on this tile, I’ll set aside this area as a nature reserve. If you let me turn this swath into agricultural land, your city can thrive.

In playing the game, it becomes obvious that some players are at a significant disadvantage while others have a greater power position. Villagers may not have anything to offer others when it comes to negotiating for their right to space on the board. On the other extreme, specific players actually get to make the final decision about the final board layout.

During the course of the game – which can get heated at times but is after all just a game – the power dynamics between various actors becomes very apparent. The process reveals clear winners and losers that mirror the reality in which some individuals benefit from the planning process while others barely have a seat at the table.

A board game to link the current disconnect

While land use planning has often been presented as a technical approach to solve a political problem, the various actors and institutions involved are inevitably political entities with different interests, strategies, and resources, as well as different positions within existing power structures. As such, there is a disconnect between the planning and actual land tenure, use and distribution. Planning is driven by political interest and ministerial development targets, while actual land allocation and use is driven by local interests and power dynamics.

Rule All can be used to show this disconnect and prompt discussions on how to resolve it, all while making the power struggles apparent to those who are confined to either a top-down or bottom-up perspective. With all players planning and executing negotiations and decisions in real time, the actual impacts of planning decisions on practical realities can be laid bare, adding transparency to the motivations behind decision making.

In real life, direct participation in land use planning processes does not in itself guarantee a plan’s success. But the game’s experience of revealing which players benefit or lose out force realities to be confronted, and assumptions to be contested. In this way, players can gain an understanding of dynamics and impacts, hopefully helping them better navigate real-life planning scenarios.

Most importantly, the board game enables key government agencies to learn about farmers’ and other government agencies’ perspectives. As one government officials said after playing the game in the role of a farmer, “I do not understand why the government wants to have all these development targets, like 70% forest cover and 4.5 million ha of agricultural land. What do these targets actually mean? We definitely need a set of indicators to unpack the importance of these targets for the country’s development and in relation to farmers’ needs, especially when achieving these targets also means reducing farmers’ access to their land.”

Of course, such a realization does not automatically result in policy change, as real life “player” need to navigate complex political landscapes. Nonetheless, such realizations could provide a key foundation for more open and deliberative decision making processes on land use planning across scales.

This story was originally published on the WLE's Thrive Blog. It discusses research undertaken by scientists supported by the CGIAR Research Programs on Policies, Institutions, and Markets (PIM) and Water, Land and Ecosystems (WLE). Diana Suhardiman is a Senior Researcher and Leader for Governance and Political Economy Sub-Theme at the International Water Management Institute (IWMI), based in Vientiane, Lao PDR. She is also an IWMI representative in PIM and a collaborator in PIM's Flagship 5: Governance of Natural Resources. Mia Signs is a communications officer with WLE and is based in Vientiane, Lao PDR.