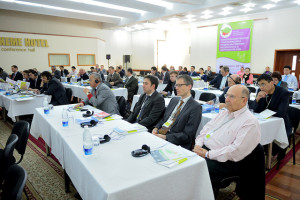 The University of Central Asia’s Institute of Public Policy and Administration (IPPA) and the International Food Policy Research Institute (IFPRI) co-hosted a conference on Agricultural Transformation and Food Security in Central Asia, 8-9 April, 2014 in Bishkek, Kyrgyz Republic, engaging  government officials, development partners and researchers from the region and abroad in dialogue on food security research.

“Agriculture provides 30 percent of jobs in Kyrgyzstan and accounts for 18 percent of gross domestic product. This event is important because it focuses on the agricultural transformation and food security in the Central Asian region,” said Dr. Nurlan Duisheev, State Secretary of the Kyrgyz Ministry of Agriculture and Melioration. “We need to develop a common policy to ensure food security in the whole region. To do this, we need to combine efforts to ensure that we can appropriately exchange information and share experiences.”

“We are beginning a joint research program that will extend for several years. We should consider these two days an opening chapter in a longer set of joint research topics, studies and analysis that we can undertake together,” said Dr. Karen Brooks, Director of the CGIAR Research Program on Policies, Institutions, and Markets.

The Central Asia Research and Capacity Strengthening Program will be implemented in partnership with the Eurasian Centre for Food Security at Moscow State University, UCA and other research institutions in the region, as well as with the CGIAR Research Programs on Policies, Institutions, and Markets and on Agriculture for Nutrition and Health, both led by IFPRI.

“The University of Central Asia is delighted to be an actor within this larger research framework in partnership with IFPRI. This conference is an important step in engaging the Central Asia research community in the critical issue of food security in the region,” said Dr. Horst Weyerhaeuser, Director of UCA’s Mountain Societies Research Institute, who moderated a session on Agricultural Trade and Regional Integration.

During the conference, IPPA's Head of Research, Dr. Roman Mogilevskii moderated a panel on Agriculture, Structural Transformation and Food Security in Central Asia and presented a paper on Agricultural Trade in Central Asia. IPPA Research Fellow, Dr. Kanat Tilekeyev moderated a session on Food Safety and Nutrition, Value Chains, and Linking Farmers to Markets and presented a paper on Access to Improved Seed and Fertilizer and Agricultural Performance in Kyrgyzstan.

The conference sessions began with a keynote address on Agricultural Transformation and Food Security in Central Asia: Institutions, Markets, Value Chains, and the Role of Government Policy by Dr. Johan Swinnen, Professor of Economics and Director of the LICOS Centre for Institutions and Economic Performance at University of Leuven in Belgium. This was followed by sessions on agriculture, structural transformation, food security and food safety and nutrition in Central Asia, value chains, agricultural trade and regional integration. A roundtable on policy issues and research priorities in Central Asia concluded the first day of the conference.

Conference discussions helped to identify knowledge gaps in agricultural and structural transformation and food security policy in Central Asia. “This will inform future research and capacity strengthening activities for IFPRI and its collaboration with UCA and other partners in the region,” said Dr. Kamiljon Akramov, the Program leader and research fellow at IFPRI.

Program and presentations of the conference

Other blogs about the conference:

From Transition to Transformation: Food Security in Central Asia (press-release)