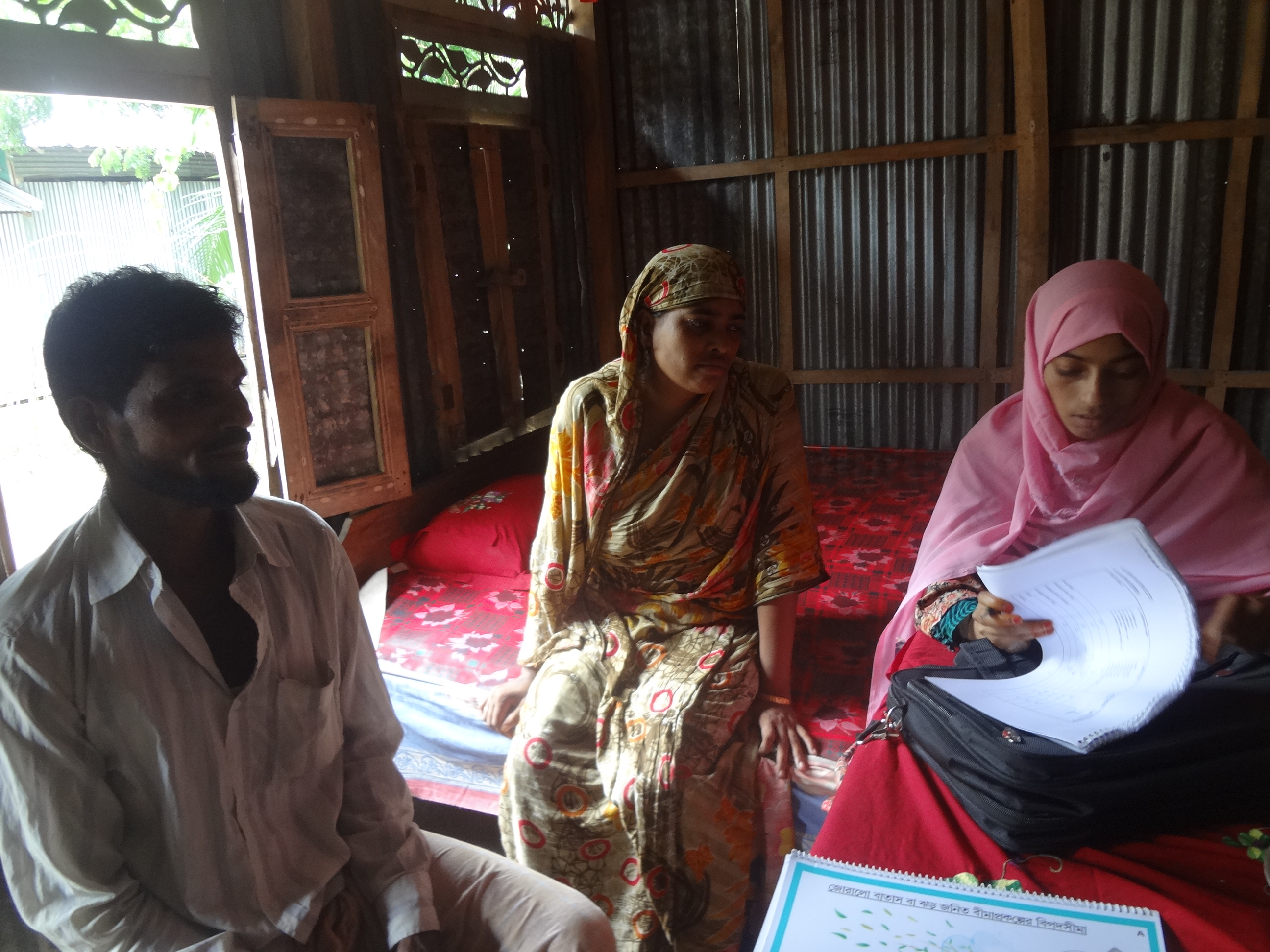 AVOIDING THE RISK OF THE UNKNOWN

The “Standards for Collecting Sex-Disaggregated Data for Gender Analysis: A Guide for CGIAR Researchers” criticizes the traditional approach of conducting “gender analysis” by comparing male- versus female-headed households. The guidelines recommend that, for some research questions and contexts, randomly interviewing a male or a female household member might be appropriate and would ensure representation of both men’s and women’s perspectives. Yet, this approach has some challenges.  In highly patriarchal societies, men might prohibit women’s participation in the surveys or suppress women’s voice. Therefore, the responses generated through this sampling technique might not reflect women’s true preferences.

...the way we approached it

We have insights into this challenge based on a household survey conducted in Bhola, a remote coastal district of Bangladesh. The study examined maize farmers’ preferences for index-based weather insurance products. We presented respondents with a series of six scenarios, each containing a choice between two index insurance products with varying levels of different attributes.

We called all sampled respondents to invite their participation in the survey and to schedule an interview. We informed respondents that the enumerator would ask detailed questions about farming practices and costs and returns from maize production. If the respondent was not fully aware of this information, then we requested the presence of the person in charge of farming.

This approach let us do two things. It made it possible to include the voices of women farmers even if they were not fully responsible for farming and it allowed us to learn about women’s agency.

To learn about individual agency, we kept track of the extent to which different household members participated in the responses. The enumerator answered the following set of tracking questions at the end of each module:

Q1. Was any member of the household present during the interview of this segment?

Q2. If yes, what is the relationship of the member with the respondent?

Q3. Did the respondent consult with the family member?

Women were more likely to have a second person present and to consult with them.  They included a man in 60% of the interviews and another woman in 23%. When present, the man was almost always consulted during the choice module interview. When a woman was present she was consulted in 76% of the interviews.

All of the women who were sampled participated in the interview. We instructed enumerators to take note of cases where men dominated during the interview by overpowering women and suppressing their voice. However, they reported no such cases.

Women were significantly less likely than men to choose an insurance product and more likely to opt for an uninsured state.  This result is partly explained by the observed heterogeneity in risk preference between men and women. Our sampled female farmers were significantly more risk averse than their male counterparts. Due to limited experience with the products and lack of financial literacy, female respondents failed to grasp the complex details of the proposed insurance scheme and thus decided to avoid the risk of the unknown.

Interestingly, women’s skepticism appeared to be contagious as whenever women were consulted either by men or women respondents, the likelihood of an insurance option being chosen significantly diminished.

Based on our experience, randomly choosing whether to interview a man or a woman in the household can provide important information with no additional financial cost.  But it does require some planning and attention. Collecting these data taught us that the adoption of innovative insurance instruments is likely to face considerable challenges, particularly in terms of reaching female clients. Even if women are not target clients, in areas where women have greater agency in agricultural decisionmaking, insurance demand is likely to be significantly lower. To overcome this obstacle, women must be educated about insurance products and their potential benefits in curbing agricultural risks.

Dr. Sonia Akter leads the Gender Research Team of the International Rice Research Institute (IRRI). She is also the coordinator for gender research for the Global Rice Science Partnership (GRiSP) program of the CGIAR. Before joining IRRI, Sonia worked as a Senior Researcher at Helmholtz Centre for Environmental Research-UFZ, Leipzig, Germany from 2011 until 2013. She completed her PhD in Environmental Management and Development from the Crawford School of Economics and Government, the Australian National University. She obtained her Master’s degree in Economics from York University, Toronto, Canada.

The research reported in this blog was funded under the Innovations for Poverty Action (IPA) program of the Yale Savings and Payments Research Fund. The study was jointly undertaken by the International Rice Research Institute (IRRI) and International Maize and Wheat Improvement Center (CIMMYT)-Bangladesh. The research team was led by Dr. Sonia Akter in collaboration with Dr. Tim Krupnik (CIMMYT) and Dr. Fred Rossi (CIMMYT).