As COVID-19 begins its spread across Africa, concerns are growing about how the pandemic will affect the region’s already fragile food systems, especially in densely packed cities.

Much of the region’s urban population works in the informal sector—many in wet markets and as street vendors—and depends on it for food, so lockdowns and other social distancing measures could pose major problems both for consumers and workers.

Traders often migrate daily to city centers on minibuses and via other forms of public transportation, and work in very close proximity to each other, and do not have the ability to take off work if they feel sick. National lockdowns, such as those in Rwanda, South Africa, and Zimbabwe, and city lockdowns in Benin, Cote d’Ivoire, Democratic Republic of the Congo, Ghana, Nigeria, and Uganda, could prove disastrous, since such traders provide the majority of food to Africa’s urban poor. How food traders are managed could have substantial ripple effects on the nutrition and income prospects of many across Africa.

How will governments respond as the pandemic continues to spread? The record is worrying.

First, African governments have a history of cracking down on informal traders, especially during public health outbreaks. When the Zambian government used the military to close down markets during Lusaka’s 2018 cholera outbreak, farmers who sold their fresh produce to informal traders lost a significant amount of income.

Second, as the trend of government decentralization has widened in Africa, many of these markets and street vending activities have fallen under the mandates of local governments. Thus they now generate significant tax revenue—not only for critical public services to combat COVID-19, such as water, health clinics and waste collection, but also to pay the salaries of local government bureaucrats. Shutting them down would therefore have negative effects on the broader urban political economy. 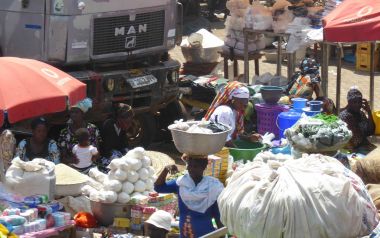 Third, during the food price crisis of 2007-2008, African cities were major sites for unrest, and this could reoccur if prolonged market lockdowns cause a large spike in food prices. There are already some early signs of price increases for food staples in Rwanda and in Kinshasa. Spiking food prices can spark protests, which would present yet another public health problem: In a region with relatively low levels of state capacity, it could be difficult for governments to peacefully discourage group protests to avoid the spread of infection.

To manage this potential looming crisis in urban centers, local political leaders should be communicating now with market leaders about how to best handle a possible shutdown. Despite outward appearances of disorderliness, many markets are actually well-governed by cooperatives or associations organized along product lines. Their leaders could identify which supplies traders need to stay safe, where to set up handwashing stations, and ways to reduce density by alternating the days traders come.

To both discourage travel to markets while still providing traders with some income, city governments could also consider temporarily relaxing bylaws that prevent citizens from selling outside their homes. Based on India’s experience with a nationwide lockdown thus far, some other feasible options include opening markets every other day and sanitizing on the off days, and allowing for trading around the clock to reduce consumer congestion.

In the longer term, crises represent critical junctures for essential reforms and innovations. Every year, thousands die due to cholera outbreaks in African cities because of unsafe water and sanitation, and markets can be major sites of infection. At the extreme, Zimbabwe’s capital, Harare, shut down its main water works in late 2019 due to a lack of foreign exchange to import treatment chemicals, deepening an ongoing national water crisis. If washing hands with clean water and soap are the main way to prevent the spread of COVID-19, perhaps the pandemic will finally lead to larger investments in this crucial area.

Similarly, like their counterparts elsewhere in the world, informal food traders in Africa have long been excluded from traditional safety nets enjoyed by those in the formal sector, including sick leave and pensions. Due to their diverse backgrounds and volatile incomes, they can also be insufficiently targeted by cash transfer programs that rely on means or proxy-testing. Instead, traders usually rely on rotating credit groups and neighborhood and funeral associations to offer support in the event of idiosyncratic shocks. With a systemic shock like COVID-19, such ad-hoc social coping mechanisms are likely to be strained. Thus, it’s key to find ways to make social protection systems more inclusive of diverse sets of urban traders. In this regard, South Africa’s promise to create a safety net for informal workers in response to this crisis should be closely watched.

Informal food traders in Africa are the heartbeat of their food systems, providing income for farmers, nutrition for poor consumers, and resources for essential urban services. It is imperative that African governments account for them in their COVID-19 responses, and not further relegate them to the shadows of the economy.

This blog post is part of a special IFPRI series of analyses on the impacts of the COVID-19 pandemic on national and global food and nutrition security, poverty, and development. It was first published as an IFPRI Issue Post.

The analysis and opinions expressed in this piece are solely those of the author.