DOES BOTTOM-UP MONITORING IMPROVE PUBLIC SERVICES? WHAT WE FOUND IN UGANDA

In many developing countries, poor delivery of public services remains an important problem. Public infrastructure, such as roads or boreholes for drinking water, is poor. The quality of service provided in hospitals or schools is low. Absenteeism and corruption are endemic.

Uganda is a case in point: its public service sector suffers from high levels of elite capture, ineffective monitoring and weak accountability. In response to this, the government of Uganda, under the stewardship of the Office of the Prime Minister, initiated community-based monitoring and accountability meetings—popularly known as barazas—with the general objective of “enhancing public involvement in holding the government accountable for service delivery in relation to the resources spent.”

In these town-hall style meetings, citizens receive information and are allowed to call officials out on not delivering on their promises. Baraza events often become very emotional and attract considerable media attention.

Barazas were first piloted in 2009. Since then, efforts have been under way to roll them out in all sub-counties in the country. The program became a high profile policy intervention which received broad support within government and among citizens alike.

But a formal impact evaluation was still outstanding. Therefore, in 2015, with the support of the International Initiative for Impact Evaluation, which funds rigorous impact evaluations in low- and middle-income countries, we designed a large study aimed at evaluating the effectiveness of the baraza program. The study involved over 12,000 households in 250 sub-counties spread throughout the country. 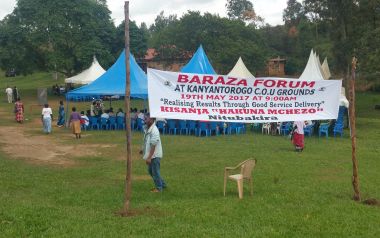 Overall, we found that barazas increased the quality and quantity of some public services, though not in all sectors, and some services were affected more than others.

Barazas organized at the sub-county level had a clear impact on service delivery in the agricultural sector. They encouraged farmers to organize themselves in associations and cooperatives, allowing them better access to government provided agricultural inputs and advisory services.

In other sectors, we found significant impacts of sub-county level barazas on access to drinking water and schooling infrastructure. More specifically, barazas reduced the time that one has to wait at the water source by 11 minutes. The intervention also increased the percentage of public schools with electricity by 50% and the percentage of schools with a water source by 15%.

Our study took the form of a cluster randomized control trial, a method often used in the bio-medical sciences that enables the researcher to attribute changes in a pre-defined set of outcomes to an intervention. In our study, we assigned sub-counties to host barazas at random, leaving the rest as the control group. Because all sub-counties are similar in terms of public service delivery before the baraza, any difference in service delivery after the study must be the result of the baraza intervention.

We set out to answer three questions. We firstly simply wanted to assess the impact of the baraza program as it was originally designed.

Second, we zoom in on the two main components of barazas. On the one hand, barazas are platforms that are supposed to increase transparency by empowering citizens with information. On the other hand, barazas encourage citizens, politicians and civil servants to actively engage with each other in the spirit of deliberative decision making.

Third, in 2012, a decision was taken that subsequent barazas would target larger administrative areas (districts) instead of the smaller sub-counties. The aim was to increase participation at a higher jurisdictional levels and reduce costs. So we checked if these larger barazas were equally effective.

Our findings suggest that barazas reduced in-kind contributions of citizens to the common good—such as voluntary labor—during construction of roads. But at the same time there was increased cash contributions for the construction of boreholes for drinking water, schools and health infrastructure.

The greater willingness to contribute cash for the common good suggests that barazas have the potential to increase trust in officials and strengthen the social contract.

We also found that barazas may be an important catalyst to organize communities around public infrastructure in the absence of social cohesion due to ethnic fractionalization.

Overall, our analysis suggests that impact from barazas may be highly localized and context specific. A baraza in one sub-county could evolve in a very different direction to one in another sub-county. They could be effective at solving the specific problems that came up during the meetings, but when outcomes were averaged to estimate overall impact, this could be diluted.

Finally, barazas are fairly cheap to organize and affect large groups of people. Even small and uncertain effects may significantly outweigh the cost of organizing a baraza every once in a while.

Bjorn Van Campenhout is a Research Fellow in IFPRI's Development Strategy and Governance Division; Caroline Miehe is a PhD candidate at the Centre for Institutions and Economic Performance, KU Leuven. Tewodaj Mogues and Nassul Kabunga contributed to the research. This post is based on research that is not yet peer reviewed. It first appeared in The Conversation.

This research was funded by the International Institute for Impact Evaluations (3ie) and the IFPRI-led CGIAR Research Program on Policies, Institutions, and Markets (PIM).