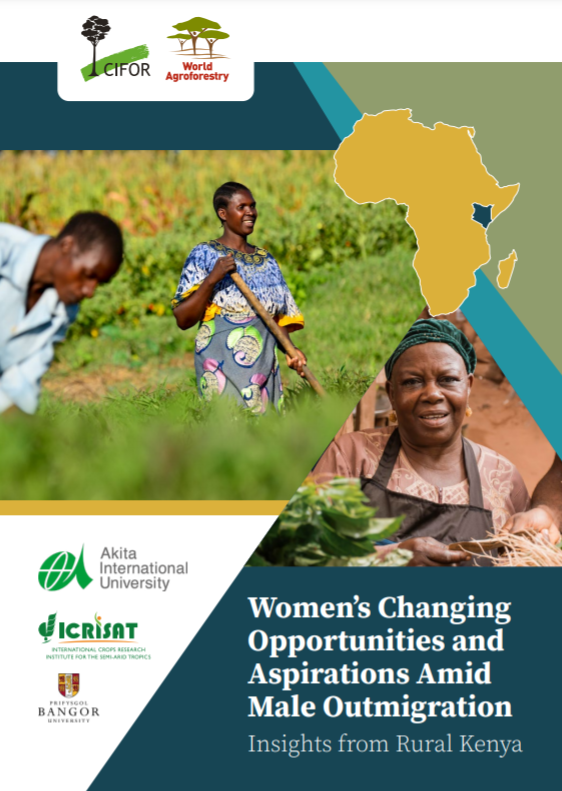 A new brief just published by CIFOR/World Agroforestry presents a study on the changing opportunity spaces of men and women in the drylands of eastern Kenya (Crossland et al., 2021). It sheds light on the dynamics of rural aspirations in relation to both gender and age within the themes of outmigration and feminization of agriculture. Using a novel methodology combining short narratives with semi-structured interviews and focus group discussions, this research contributes to a more nuanced understanding of aspirations and the wider socio-cultural context within which they are embedded and makes several recommendations for progressing aspirations research. The purpose of the research is to provide a better understanding of people’s current situations, desired trajectories and the influences that shape these aspirations, so that researchers and development actors might better tailor their support options to meet the needs of different user groups by matching technologies to their strategies and demands.

Increased agency or lack of choices?

Women interviewees believed that opportunities in agriculture had increased in recent years due to increased agricultural training and better knowledge of new farming practices. However, farming conditions were said to have worsened due to poor and unreliable rainfall.

Women saw farming as a way to earn income and provide food for their families, and their plans for the future included gaining access to water for commercial production of vegetables, poultry farming and starting small shops to sell their produce.

However, several women indicated that women’s involvement and interest in farming is born out of necessity rather than choice. This implies that, while women’s opportunities in agriculture are thought to be increasing, norms designating them as carers of the household and as vulnerable in urban settings, constrain their ability to explore opportunities outside of farming.

How can women’s voices be amplified in a situation of prevailing patriarchal norms? Evidence from a civil society mapping project in Mali.

Two recent studies from researchers at IFPRI, KU Leuven, and UN FAO aim to improve the way food loss is studied and measured in order to provide a clearer policy roadmap.

Advancing women’s land rights is a priority for the international development agenda. Yet, there is no consensus on which rights should be monitored and reported.