Advancing women’s land rights is a priority for the international development agenda. Yet, there is no consensus on which rights should be monitored and reported. Three indicators of women’s property rights are widely used in the literature. Each captures a different aspect of women’s land rights, but a recent paper explores the extent to which these different rights are held by the same person, using data from six African countries.

The first indicator considers who owns the land. In surveys, this information may be collected by asking one household member to identify all plots of land and their owners or by asking individuals within the household about their land ownership. This self-reported ownership is not necessarily what would be legally considered ownership. A variation on this indicator is documented ownership – in other words, identifying whose name(s) are on any ownership documents, such as titles, registration papers, or sales receipts. This may be closer to legally recognized ownership, although the documents referred to may not be legal titles.

Who manages the plot is the focus of the second indicator. This would be the person who makes the decisions about what to grow and what inputs to use. This indicator is now widely used in analyses of gender gaps in agricultural productivity.

The third indicator concerns who controls the use of the output. In contrast to the plot manager, who is focused on the production decisions, this is the person who has control over the outputs and thus the revenues generated from the land. It is now more frequently collected than in the past because it tends to be seen as the most direct measure of control over the economic benefits from agriculture.

Is it worth noting that agricultural surveys and censuses collected by the Food and Agriculture Organization (FAO) typically focus on the agricultural holder, who is described as the person with the technical and economic responsibility for the whole farm (FAO, 2015). FAO’s concept of the agricultural holder picks up on the two last indicators, but it is at the household farm level and does not capture intra-household distribution of decision-making and rights over different plots or agricultural activities.

Quantitative evidence from six nationally representative surveys in Africa (LSMS-ISA surveys) indicates that the gender gaps in land rights differ, depending on which indicator of land rights is used. They also vary widely across countries. The patterns also vary depending on whether we consider rights held by a single individual (sole rights) or those held jointly with others (usually a spouse). 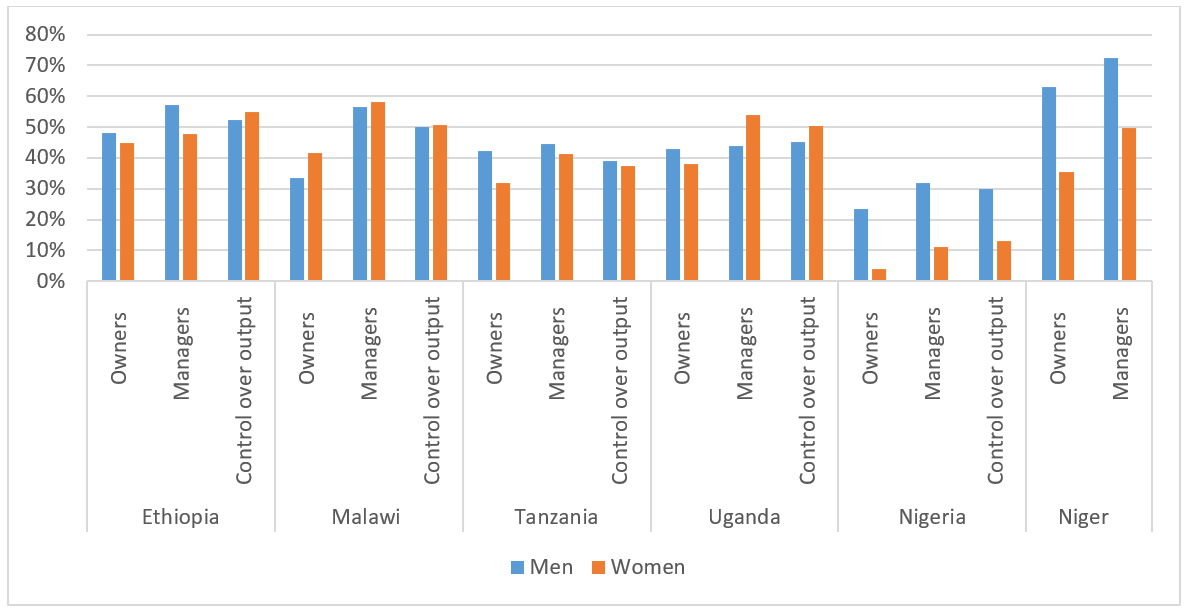 Analysis at the plot level explores whether these three different indicators of land rights are held by the same or different individuals for each plot. Figure 2 shows the proportion of plots owned by men, owned by women, and owned jointly for two scenarios: first, where ownership and management reside in the same person or persons; and second, where ownership and control over output are held by the same person or persons.

The overlaps between ownership and management are highest in Niger, Tanzania, and Nigeria, where 84%, 77%, and 75% respectively of plots are managed by the owners. In other places, it is closer to 60%. This suggests that often the manager is not the owner.

Figure 2. Percentage of plots, by sex of reported owner, for which the reported owner also holds the other indicated rights (cultivated plots only).

Similarly, the owner is not necessarily the person who controls the output. The overlap between ownership and controlling output is stronger for plots owned solely by a woman than those owned solely by a man.  In part, this is because if women household heads have any land rights, they have all of them, because there are no men in their households. This suggest that other family members may have some say about the use of agricultural products, even from plots owned by men.

Further analysis shows that in no country do we see more than 8% of the plots owned by men being managed solely by women. Thus, the stylized fact that women are given plots to manage by their husbands is not visible in the data. It may be that when a man allocates a plot that he owns to his wife to manage, it is reported as jointly managed, rather than managed solely by her.

Yet, the quantitative evidence is clear. We should not treat these different rights as interchangeable in our analyses. The rights are frequently not held by the same person.

To learn more about the study cited in this blog, see:

Cheryl Doss is associate professor and senior departmental lecturer in development economics at the Oxford Department of International Development, University of Oxford, and leader of the Cross-Cutting Gender Research and Coordination flagship in the CGIAR Research Program on Policies, Institutions, and Markets (PIM). Vanya Slavchevska is gender and social inclusion scientist in the Crops for Nutrition and Health Lever at the Alliance of Bioversity International and CIAT.