An overarching goal of the Policies, Institutions, and Markets (PIM) program has been to influence policy outcomes in ways that lead to agricultural transformation and economic inclusion. Yet, policy change is rarely achieved through high-quality research alone. Multiple, other factors may shape policy uptake, including changing policy priorities during elections, ideological biases, and vested interests lobbying against data-driven or evidence-informed recommendations.

A political economy perspective allows for a more holistic and realistic understanding of how policies are determined by governments and which pathways are more viable for achieving development outcomes through policy change.

A new PIM Synthesis Brief by Danielle Resnick reviews key aspects of the political economy dynamics of the policy process that have emerged from PIM research and discusses the various ways in which PIM researchers have navigated these dynamics to enhance the influence of their findings. In addition to reviewing publications, the author conducted interviews with researchers to gain insights about both successful and failed policy impact stories across Africa, the Middle East and North Africa, Asia, and Latin America, and the role that political economy factors played in these outcomes.

This brief provides a synthesis of experience with four dimensions that shape political economy environments, including: the nature of a policy, the interests of diverse agrifood system actors, the structure of political institutions, and the capacities and incentive systems within government bureaucracies.

The brief further discusses how PIM researchers have used lessons learned about these four dimensions to inform their choice of local partners and outreach strategies to increase the likelihood of policy influence.

As noted by Cairney (2016), “many contemporary discussions of policy making begin with the problematic belief in the possibility and desirability of an evidence-based policy process free from the worst excesses of politics.” PIM research demonstrates that this belief is indeed problematic and that embracing political economy considerations is necessary to understand which policies are likely to be prioritized and implemented. As shown by the review of several PIM studies in this note, PIM has been a major contributor to the CGIAR’s portfolio of political economy studies on agricultural services, public goods, and rural development more generally. 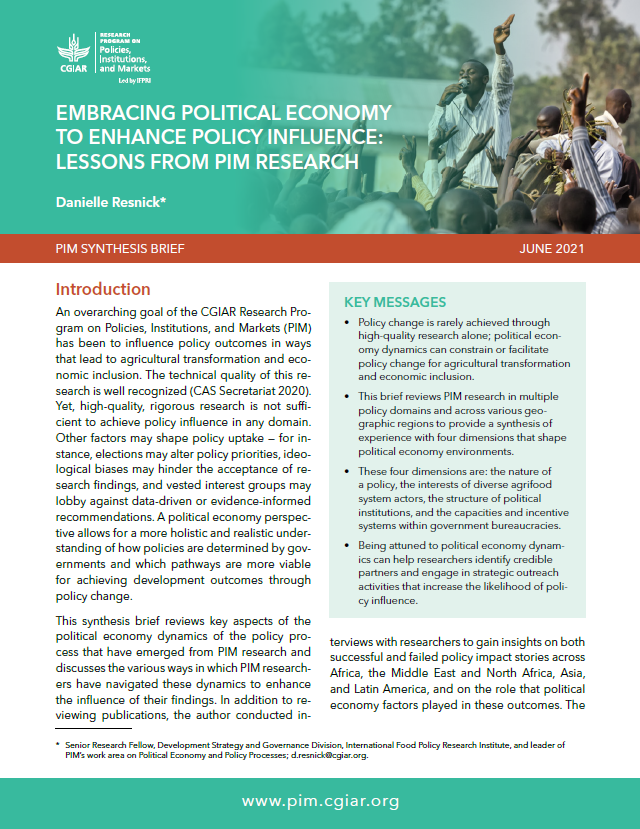