A NEW MODEL FOR INCLUSIVE SEED DELIVERY: LESSONS FROM A PILOT IN KENYA

Climate change has dramatically increased the frequency and severity of extreme weather events, affecting the livelihoods of millions of smallholder farmers across Africa south of the Sahara. Improved stress-tolerant crop varieties can help deal with climate-related risks to harvests, but only if we can get the seeds of these varieties to farmers and make sure this is done in an inclusive manner.

The formal seed sector in Africa is often accessible primarily to relatively large-scale (often male) farmers who have the finances to invest in more expensive seeds of improved and more stress-tolerant varieties. Smaller-scale farmers (often women) cannot take the risk of investing their scarce cash in these seeds and are more likely to obtain seeds from informal sources, including local networks and relatives. The ongoing COVID-19 pandemic has further restricted farmers’ access to finance and agricultural inputs and has exacerbated social inequities.

ACRE Africa, a service provider working with local insurers and other stakeholders in the agricultural insurance value chain in Kenya, Rwanda, and Tanzania, seeks to provide holistic risk management solutions to help smallholder farmers adapt to climate change, including insurance to reduce the risk of investing in more expensive stress-tolerant seeds. In 2018, after learning about the PIM-supported Picture-Based Insurance (PBI) project piloted by IFPRI and partners in India, ACRE reached out to the PBI team to test this new crop insurance approach. 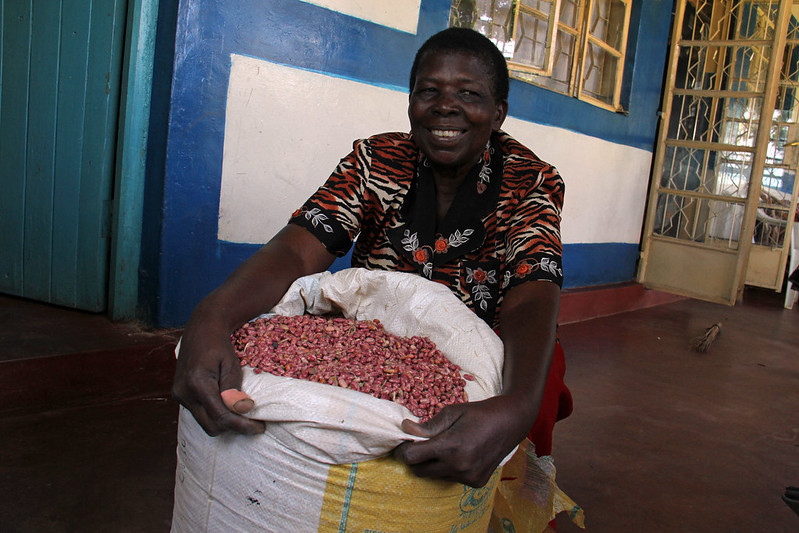 To deliver these solutions in an inclusive way, the consortium decided to work with ACRE champion farmers—local opinion shapers who have influence on agricultural practices and can promote inclusion in their communities.

Here is how the model was envisaged to work. ACRE trains the champions and equips them with smartphones and ACRE branded clothing. At the start of the season, champions take an inventory of demand for different types of seeds (both regular and stress-tolerant varieties) from farmers in their area. Based on this, ACRE places orders with seed companies through regional distributors—at negotiated prices and bundled with insurance to reduce investment risk. The seeds are then delivered to locations convenient for both champions and farmers. Champions earn a commission per bag of seed sold, calculated as the difference between the negotiated wholesale price and the retail price. In the event of a crop failure, champions take images of insured crops via a smartphone app called seeitgrow to document damage and inform claims settlement.

ACRE and the consortium partners piloted this approach in September 2020, at the start of the 2020/21 short rainy season. To prepare for the pilot, in preceding seasons, ACRE distributed small demo packs of stress-tolerant maize and sorghum varieties to 190 champion farmers and close to 3,000 farmers in seven counties across Kenya.

Despite registering high demand in their original inventory, only 4 champion farmers were able to sell seeds; and combined, they sold only 54 bags of sorghum and 15 bags of maize seeds to farmers. The large gap between the expressed demand and the actual sales was largely attributed to: 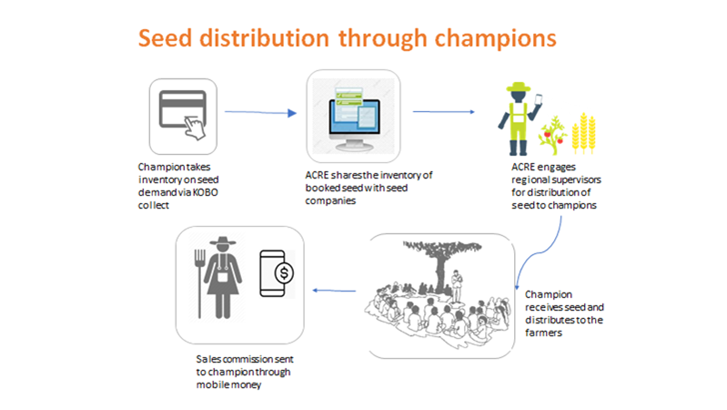 To address these challenges in the subsequent agricultural season, ACRE made several adjustments to the model. First, it ensured that all activities were implemented early and seeds were delivered in time—so that farmers would not feel the need to purchase elsewhere. To facilitate this, ACRE instituted a revolving fund to finance seed purchases from regional distributors. The project also faced little to no competition from government programs (because in most target counties, this season is considered unreliable), and thereby filled an important gap in access to quality seeds.

These adjustments helped: the demand for seeds was considerably higher than in the previous season, and the gap between the amounts booked and sold decreased (see figure below). Still, farmers primarily purchased regular maize varieties; the demand for more drought-tolerant crops (sorghum and green gram) and stress-tolerant maize varieties promoted by the project remained low. 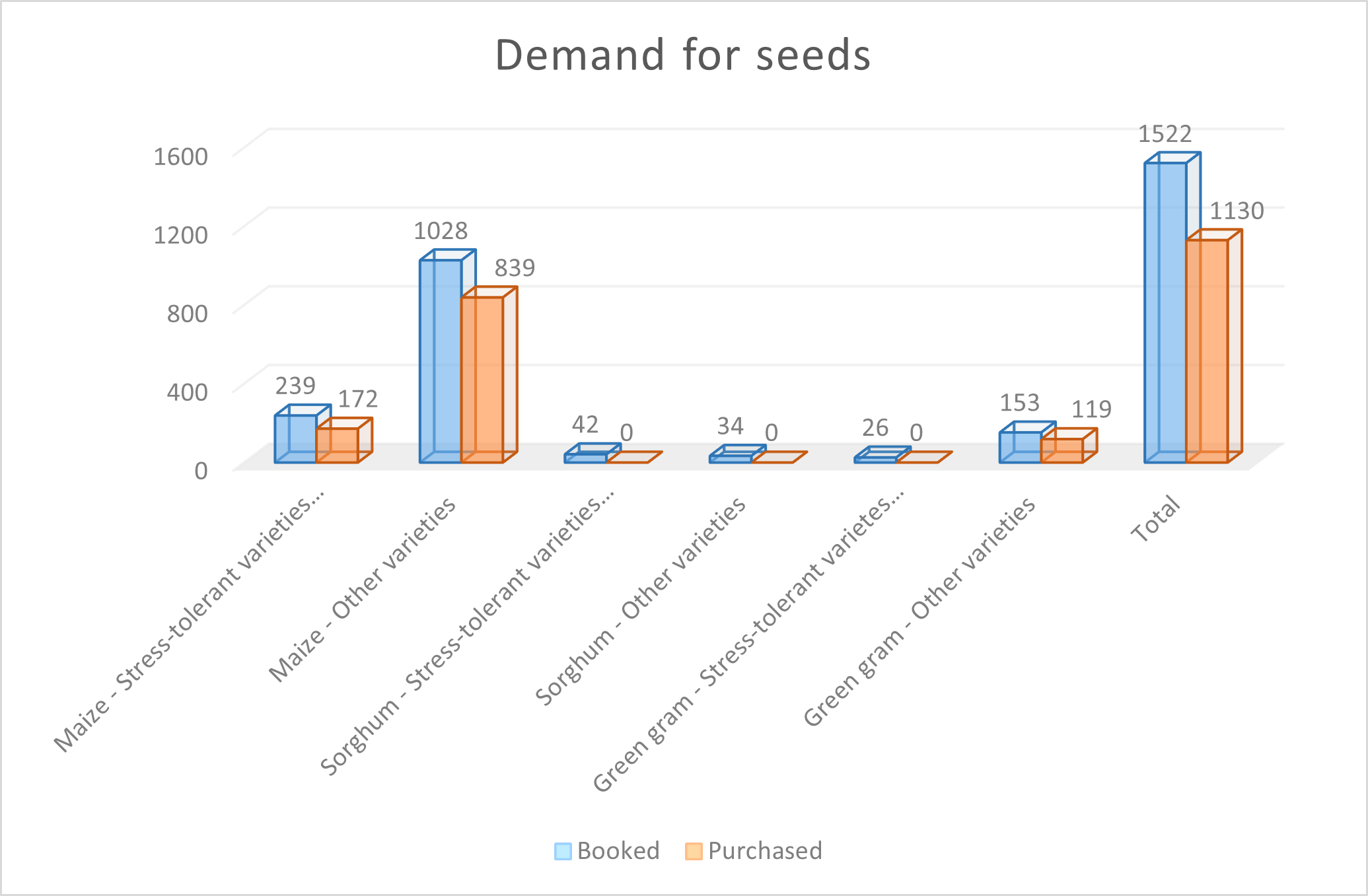 Here are a few lessons ACRE and partners have learned during the project and some of the plans to address them:

Moving forward, it will be important to test alternative approaches to increasing demand for stress-tolerant varieties. For instance, to date, ACRE fully subsidized insurance premiums and did not condition providing insurance on purchasing seeds. It would be interesting to see if—as ACRE phases out full subsidies—providing insurance at a discounted rate to farmers who purchase seeds of stress-tolerant varieties makes the bundle more attractive to farmers. As the new varieties are more widely adopted, an added advantage of making the connection with picture-based insurance more explicit is that the crop images provide ACRE and partnering seed companies with ground data to verify that the stress-tolerant varieties work as promised (or not) and indeed reduce smallholder farmers’ exposure to risks.

To learn more about this work, read the project note: