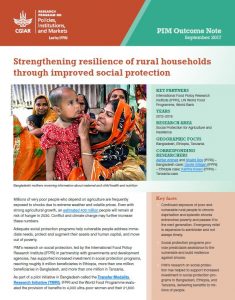 Millions of very poor people who depend on agriculture are frequently exposed to shocks due to extreme weather and volatile prices. Even with strong agricultural growth, an estimated 400 million people will remain at risk of hunger in 2030. Conflict and climate change may further increase these numbers.

PIM’s research on social protection, led by the International Food Policy Research Institute (IFPRI) in partnership with governments and development agencies, has supported increased investment in social protection programs, reaching roughly 8 million beneficiaries in Ethiopia, more than one million beneficiaries in Bangladesh, and more than one million in Tanzania.