Progress toward gender equality enhances inclusion and promotes effective development. Gender bias contributes to underlying causes of all the grand challenges identified by CGIAR: Living within Planetary Boundaries; Securing Public Health; Promoting Equality of Opportunity; Sustaining Food Availability; and Creating Jobs and Growth. Scientists supported by the CGIAR Research Program on Policies, Institutions, and Markets (PIM) are working to provide solutions to eliminate this bias. Some of the questions PIM seeks to answer are:

The Women’s Empowerment in Agriculture Index (WEAI)—part of the PIM portfolio and a joint effort of the International Food Policy Research Institute (IFPRI), the Oxford Poverty and Human Development Initiative (OPHI), and USAID under the US Feed the Future Initiative—is the first comprehensive and standardized measure of women’s empowerment and inclusion in the agricultural sector. Launched in 2012, the index aims to increase understanding of the linkages between women’s empowerment, agricultural productivity, and food security. By doing so, it helps to diagnose empowerment gaps, identify and prioritize interventions to close these gaps, and test the effectiveness of these interventions.

The WEAI has been adopted by a wide range of research and development organizations (e.g., FAO, IFAD, UN Women). In 2017, the Comprehensive Africa Agriculture Development Programme (CAADP) biennial reporting framework and guidelines recommended that the WEAI be used for measuring the indicator on “Proportion of rural women that are empowered in agriculture.” The Inter-American Development Bank has used the WEAI to assess the impact of agricultural projects on women’s empowerment in Bolivia and Nicaragua, and is mainstreaming the WEAI in land titling projects in Bolivia, Ecuador, and Peru. As of February 2019, 86 organizations in 53 countries have used the original index or one of its versions. The Abbreviated-WEAI (A-WEAI) is a simpler tool designed for use on a wider scale. Work is ongoing to develop the pro-WEAI,  tailored for project use with emphasis on aspects of empowerment related to health and nutrition (under the CGIAR Research Program on Agriculture for Nutrition and Health), and the WEAI for Value Chains (WEAI4VC), which focuses on measuring women’s empowerment within  value chains.

Intimate partner violence (IPV) is a pervasive public health problem. One in three women worldwide experiences physical or sexual IPV during her life.

A PIM-supported study conducted in Bangladesh by an IFPRI/Cornell University team (Roy et al. 2018) shows that cash transfers coupled with behavior change communication can reduce physical violence by 26 percent. The reductions in violence were found 6–10 months after the intervention ended, providing the first evidence that such benefits can be sustained after cash transfers and related programming end.

"The study results suggest that adding behavior change communication (BCC), which empowered women economically and socially more than transfers alone, was necessary to sustain the reductions in violence. Given that the BCC was focused on child nutrition, not violence or gender, we think a key function it played was to bring women together and increase their social status.” — Shalini Roy, lead author.

In other contexts, transfers also lead to reductions in IPV. PIM found such effects for food, cash, and voucher transfers to urban families in Ecuador (Hidrobo et al. 2016) and for cash transfers to polygamous households in Mali (Heath et al. 2018). A PIM-supported review of studies linking cash transfer programs and IPV in low- and middle-income countries (Buller et al. 2018) also showed compelling results. Out of 14 quantitative and 8 qualitative studies included in the review, 11 and 5 respectively demonstrated reductions in IPV. Three main mechanisms through which cash transfers affect IPV are identified: poverty reduction, conflict reduction, and women’s empowerment. These findings have stimulated a more coordinated research effort under the Cash Transfer and Intimate Partner Violence Research Collaborative to generate a larger body of evidence on the relationship between cash transfers and IPV. 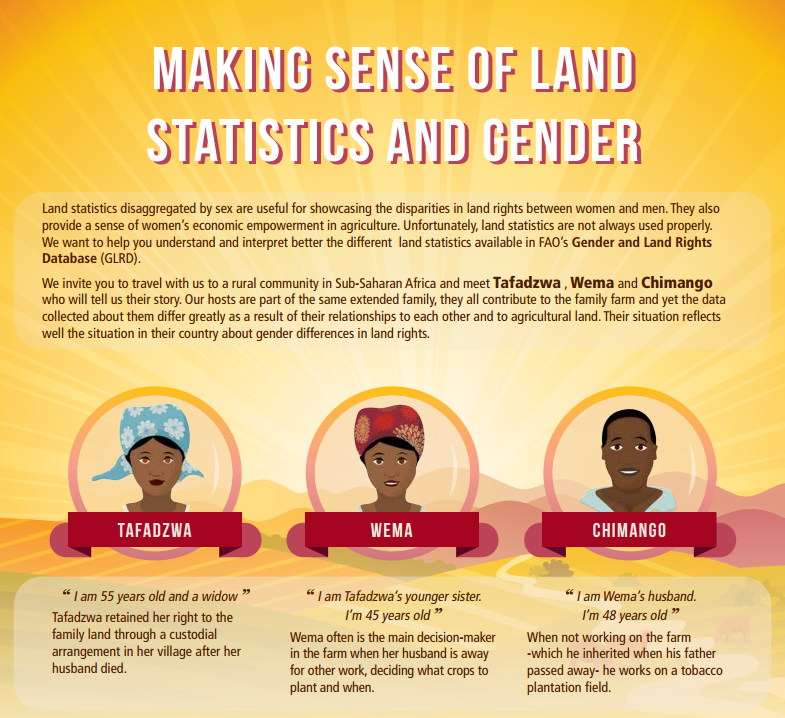 In 2016, FAO and PIM released this infographic to demonstrate the correct use of the land-related statistics disaggregated by sex available in the updated GLRD.

The most widely used proxy to measure women’s land rights is the “distribution of agricultural holders by sex”, available in the Gender and Land Rights Database (GLRD) of the FAO. This statistic is derived directly from agricultural census data and based on the legal entity of the farm and its manager or holder. This statistic only captures one dimension of the complex realities of women’s control over land and is not very practical as a monitoring tool. In order to both monitor progress on the Sustainable Development Goals (SDGs) and operationalize landownership statistics in national statistical systems, the GLRD team partnered with PIM to develop new indicators of men’s and women’s control over land. Five indicators are now available in the GLRD (De la O Campos et al. 2015) based on the framework proposed in the PIM paper “Gender Inequalities in Ownership and Control of Land in Africa: Myth versus Reality” by Doss et al. (2015).

Among the PIM studies on the effectiveness of extension methods, several are focused on gender dimensions. Research by the World Agroforestry Centre on volunteer farmer trainers (VFTs) finds that the VFT approach has increased the number of women participating in extension activities in Cameroon, Kenya, Malawi, and Uganda (Franzel et al. 2018). A study by IFPRI and the World Bank (Mogues et al. 2018) finds that including women among community volunteer trainers led to more positive outcomes for all target groups, but that the costs of reaching women were higher than for men. New research is underway in Uganda to test gender-inclusive, video-mediated extension methods.

Busting myths on gender in agriculture

A paper by an Oxford/IFPRI team (Doss et al. 2018) debunks four myths about women in agriculture: 1) 70 percent of the world’s poor are women; 2) Women produce 60 to 80 percent of the world’s food; 3) Women own 1 percent of the world’s land; and 4) Women are better stewards of the environment. After reviewing the conceptual and empirical literature, the paper presents the kernel of truth underlying each myth, questions its underlying assumptions and implications, and examines how the persistence of the myths hinders development of effective food security policies. Lambrecht et al. (2018) provide a unique overview of changes in gender patterns in agriculture in Ghana over more than 20 years, showing that some stylized facts about gender differences in agriculture have never existed; for others, the gender gap is closing or widening, while some longstanding beliefs remain largely true. For example, the results do not support the conventional wisdom of an ongoing “feminization of agriculture”, in terms of access to land, disproportional involvement in the production of some crops, or women's primary occupations. Women still provide more unpaid farm labor than men, but the share of women who do so as their primary employment is decreasing. The results also show that a person's role in the household may be a more important determinant of observed behavior patterns than the gender of the farmer.

An IFPRI study in Bangladesh, Tajikistan, Timor-Leste, and Viet Nam (Kieran et al. 2017) uses data on individual-level land ownership to analyze gender gaps in landholdings across and within households. The study finds that women are less likely to own land and own less land, on average, than men. The gender gap in landownership increases as households accumulate more land, which suggests that greater wealth does not lead to greater gender equality. These findings support the need to strengthen women’s land rights within marriage and to protect them should the marriage dissolve.

Women’s land rights as a pathway to poverty reduction: highly agreed, yet to be proven

An IFPRI team (Meinzen-Dick et al. 2017) develops a framework to understand various pathways through which women’s land rights (WLR) increase the well-being of women and their households. Through review of empirical literature, the authors find that ownership strongly affects women’s bargaining power and decisionmaking on consumption, human capital investment, and intergenerational transfers. Weaker evidence is found on the relationships between WLR and empowerment, domestic violence, resilience, HIV risk, consumption, food security, access to credit, technology adoption, and agricultural productivity. Although there is a high level of agreement that WLR ultimately reduce poverty, no studies test these linkages directly. The study highlights key research gaps that will need to be addressed to verify the link.

In the context of insecure land rights and loss of authority of customary institutions, ILRI research in Ethiopia shows that participatory rangeland management (PRM) interventions can act as a vehicle for pastoralist women's empowerment through increasing their participation in public decision-making processes and improving access to land and resources (Flintan et al. forthcoming). Further research in Tanzania (Daley et al. 2017) and India (Agarwal forthcoming) explores how pastoralist women's land rights can be best secured - through individual or collective tenure.

Gender experts need to be part of value chain interventions

A team from CIP and CIMMYT (Naziri et al. 2017) finds that the extent of gender mainstreaming in value chain development interventions in Uganda varies significantly. Interventions that have input from gender experts or use specific tools to guide project staff on how to engage with women do a better job of considering women’s needs, allowing women to benefit as much as men from value chain development.

While structural transformation involves people moving out of agriculture, the specifics of this process may determine who gains and who loses. An IFPRI/Oxford team (Mueller et al. 2018) investigates how youth migration in Ethiopia and Malawi affects household labor, hired labor demand, and income, and whether these effects vary depending on whether men or women migrate. Authors find that the migration of a head-of-household’s sons produces a greater burden, particularly on female heads/spouses (in Ethiopia) and brothers (in Malawi). Increased total net income gained from migration justifies the increased labor efforts in Ethiopia, while households in Malawi substitute hired for migrant labor, which leads to reduced household net income. Further IFPRI studies in Ethiopia (Kosec et al. 2017) and Nigeria (Ghebru et al. 2018) find that a larger expected land inheritance  reduces the likelihood of long-distance permanent migration by youths. The effects are similar for young men and women in Nigeria, while in Ethiopia, this phenomenon is only observed among male youth.