UNSUSTAINABLE USE OF GROUNDWATER MAY THREATEN GLOBAL FOOD SECURITY 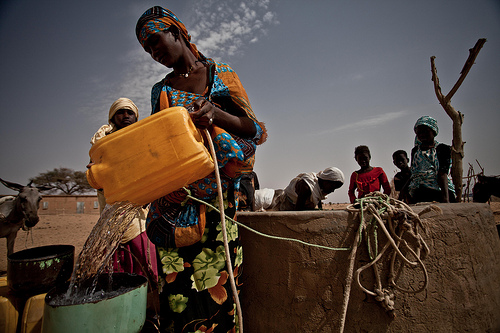 In celebration of this year's World Water Day (March 22, 2014), this blog tells about the role of groundwater in food security and is based on the interim results of ongoing research by IWMI and IFPRI supported by the CGIAR Research Program on Policies, Institutions, and Markets (PIM).

Karen Villholth is a principal researcher and groundwater expert at IWMI. Aditya Sood is PIM’s Focal Point and hydrological modeler at IWMI. Evgeniya Anisimova is communications specialist at PIM.

Groundwater and its role in food security

Groundwater is water located beneath the earth's surface in soil pore spaces and in the fractures of rock formations. The natural underground reservoirs containing groundwater are called aquifers. They can be broadly classified as shallow and deep aquifers. Shallow aquifers are usually connected to surface waters, like rivers and lakes, and can be easily harnessed (by, for instance, installing a simple pumped well). They can also be replenished relatively quickly. The deeper an aquifer, the less connected it is to surface water, and the longer its residence time (the time water stays in it).  Consequently, deep aquifers are not only less accessible, but also take much more time to be replenished (from centuries to even millennia).

Considering that groundwater constitutes about 30% of all freshwater (including frozen) on Earth and about 96% of all liquid freshwater, the importance of sustainability of this resource is evident.

Groundwater plays an increasingly important role in food security. FAO reported in 2003[i] that about 10% of global food production depends on the use of groundwater. A more recent paper says that 40% of all cultivated land under irrigation is ‘water well equipped,’ or dependent on groundwater (Foster and Shah, 2012). However, in neither case have the reports included explicit analyses. This indicates that more detailed and up-to-date assessments are required, especially on the role of depleting (extraction in excess of recharge) aquifers in food production.

Interim results from the study currently led by IWMI and IFPRI on the role of groundwater in global food production present a worrying picture. A significant share relies on the unsustainable use of groundwater; in many regions groundwater is being extracted for irrigation in volumes exceeding the pace of natural replenishment. This is particularly the case in semi-arid areas with intensive food production.

What are the main issues?

The abstraction of groundwater has increase dramatically since the mid-20th century. 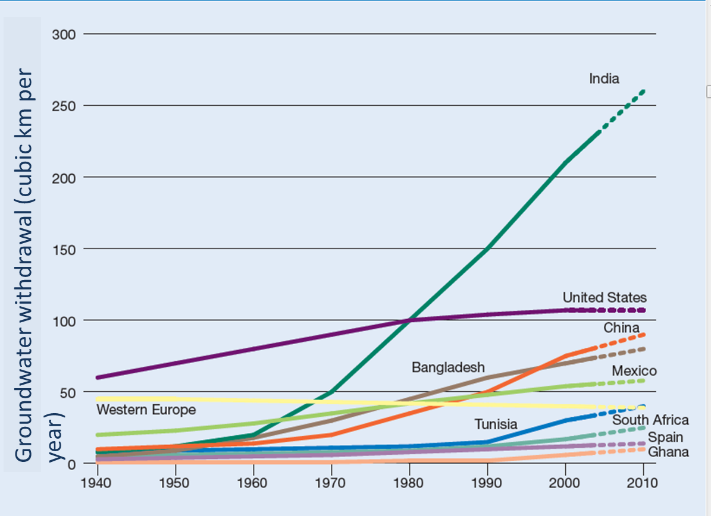 In some parts of the world the economic benefits of using groundwater today are reduced or fully offset by the cost of extracting the water from the earth’s depths (reaching up to 1000m in some areas).  And these are the regions where just a few decades ago farmers could dig wells without much special equipment: in India, China, Mexico, Middle East, Central Asia, North Africa, and even USA.

Preliminary results from the IWMI/IFPRI work indicate that about 34% of global irrigated crop production today uses groundwater of which about 7% takes water from depleting aquifers. Asia accounts for the largest share of food production from non-replenishing groundwater; in particular, almost one third of all vegetables in the region are grown this way. But the champions among the crops irrigated by the depleting groundwater are cereals and sugar.

To put this all in perspective, the volume of the annual global non-renewable groundwater use (256 cubic km) is equivalent to the annual discharge of the Volga River, the largest river in Europe, or to half of the storage of Lake Erie shared by Canada and the US[ii]. In fact, the current scale of the Earth’s groundwater reserves’ decrease is so big that it can be observed by satellites. This loss of water is not just significant; it may bring about such consequences as sea level rise and exacerbated droughts in those areas where groundwater has historically played a role of natural buffer against fluctuations in rainfall. This will adversely affect groundwater dependent ecosystems and human communities, hitting the most vulnerable hardest: poor people in arid and semi-arid regions, densely populated areas, and small-holder farmers heavily dependent on irrigated food production. Both climate change and food security and resilience issues come to bear here.

As the world community focuses on meeting nutritional demands of a  growing population with limited natural resources, irrigation will be an even greater player in future food production with groundwater remaining a very important source. The underground water reserves will also be crucial for mitigation of adverse effects of climate change.

We must better monitor and understand movements and replenishment of groundwater at various scales and under different climatic and demand scenarios to be able to project its role in building resilience for the future. We also need better analyses of existing water and food policies and of their impacts on water resources and food security at multiple global and national levels. Such analysis would help develop a more sustainable and congruent approach accounting for linkages between groundwater and food security. The IWMI/IFPRI team will concentrate on these issues during the second phase of this research.

The attached presentation was delivered by Karen Villholth and Aditya Sood in overview of preliminary results of this research in February, 2014 at IFPRI. Please contact the authors if you have questions or wish to quote.

[ii] Results from the PCR-GLOBWB model.