FOSTERING THE CGIAR GENDER RESEARCH COMMUNITY: REFLECTIONS FROM THE PAST 3 YEARS

Rhiannon Pyburn just completed her tenure as Coordinator of the CGIAR Collaborative Platform for Gender Research, which operated in 2017-2019 and was hosted by PIM. In this piece, she shares her reflections on the experience. 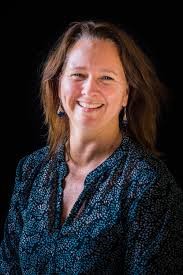 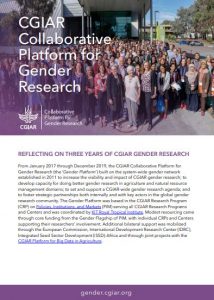 The time around the New Year offers a good opportunity to reflect. This year, I had even more reasons to do this!

My 3-year tenure as Coordinator of the CGIAR Collaborative Platform for Gender Research, active from January 2017 and till the end of December 2019, came to an end. As of 1 January 2020, the Platform transitioned to its new manifestation as GENDER (Generating Evidence and New Directions for Equitable Results) Platform, led by the International Livestock Research Institute (ILRI).

For me and my colleagues at PIM and KIT, these past three years have been an exciting, enriching, demanding, and occasionally frustrating journey. Overall, the results are very rewarding. The Platform has blossomed from being a ‘cluster of activities’ within one CGIAR Research Program to an impressive independent entity. Wishing all the best to the Platform in its new developments and sharing some of my reflections and experience from the previous stage here.

Year One: Building a foundation

Building a sound foundation was the main challenge and achievement in year one, alongside resource mobilization. Outreach to gender researchers within CGIAR was key to getting the ‘buy-in’. We had to demonstrate that while housed within PIM and coordinated by KIT, the Gender Platform was serious about its promise to serve the whole CGIAR gender research community.

The ambitions and expectations were high, the resources modest – a real challenge! We called for engagement and in-kind contributions from the CGIAR Centers and research programs. The response from the evolving CGIAR gender community was amazing. Through participating in Platform-initiated in-person and virtual meetings, calls for proposals, campaigns and workshops, and working together on the Platform’s quarterly newsletter, the gender community became stronger and more dynamic and engaged. Limited resources also meant that we had to be clever and strategic in approaching partners and donors for support on mutually interesting work, which bore fruit in the following years.

The highlight of the year was the first Annual Scientific Conference and Capacity Development Workshop,  held at KIT Royal Tropical Institute in December. About 100 gender researchers converged to present, share, and discuss gender research. The buzz was palpable! The agenda was set for a new phase of activity and collective progress within the CGIAR gender community, including collaboration with the CGIAR Platform for Big Data in Agriculture.

In 2018, the focus was on consolidation and strengthening. We worked with gender dynamics in seed systems grantees on collaborative research projects and put out a second call for proposals on the “feminization” of agriculture. Securing additional resources was critical to expand our work. We were delighted to benefit from support from the International Development Research Center (IDRC) to increase the number of grants awarded on the “feminization” of agriculture. Funding from the European Commission allowed us to reflect on CGIAR efforts on the topic of Gender Transformative Approaches in agriculture, aquaculture, and natural resource management. The 2018 Annual Scientific Conference co-organized with the International Livestock Research Institute (ILRI) in Addis Ababa in September was a highpoint, with about 120 gender researchers from across and beyond CGIAR. At this conference it was decided to develop a system-wide publication to craft a next generation of CGIAR gender research, taking stock of the past 10-30 years of work on specific themes. First steps toward a future independent Gender Platform were also made.

Year Three: Last but not least!

Last year was full and engaging. We benefited from a more generous resource allocation and continued to build on the work of the previous years. In particular, we focused on the synergies between the CGIAR-wide gender research agenda, the work on Gender-Transformative Approaches and Platform-funded grants, including a third call on Gender Dynamics in Value Chains. We were very pleased to work with the Integrated Seed System Development Africa (ISSD-Africa) program, funded by the Swiss Agency for Development and Cooperation, to put out a follow-up call for proposals on Gender Dynamics in Seed Systems embedded within that program for the next 3 years. This will allow CGIAR gender research on gender and seed systems to inform practice and policy. The report on Gender-Transformative Approaches prepared by the Gender Platform was presented at the Food and Agriculture Organization of the United Nations (FAO) and the lessons were brought into European Commission-funded Rome-based agencies’ projects. Working with these partners is an important channel for putting CGIAR gender research into use.

2019 also saw an expanded outreach and strengthening of partnerships, as the Gender Platform organized its first jointly convened scientific conference, with the University of Canberra and the Australian Center for International Agricultural Research (ACIAR), in Canberra, Australia: Seeds of Change. This conference gathered about 200 participants including university students and development practitioners, many based in the Asia and the South Pacific. High profile keynote speakers and leaders in the field were in attendance. As expressed by co-convener Barbara Pamphilon (University of Canberra), we were “seeing our bibliographies come to life!”

Massive work has been done toward the synthesis of what we have learned about how agriculture and natural resource management can advance gender equality and crafting the next generation of CGIAR gender research. An overview of the progress was made during a policy seminar in October 2020 with colleagues from CIFOR, CIAT, ICARDA, and IFPRI presenting.

Top photo taken at the "Seeds of Change" conference in Canberra, Australia, April 2019.