How do we measure male participation in domestic work? Men can be asked to directly report whether they have engaged in such work, but these reports may be subject to various types of social desirability bias. If men generally feel that such work is traditionally the domain of women and/or low status, they might not wish to report that they participate; alternatively, if interventions have directly promoted this engagement, men might be subject to experimental demand effects and be motivated to report that they did. One potential strategy is to pose similar questions to men’s female spouses, as using reports from both parties allows researchers to further understand patterns of agreement or disagreement within the household.

In two recent surveys conducted in Ethiopia as part of two different randomized controlled trials, IFPRI researchers collected data on men and women’s reports of men’s engagement in domestic work. The first survey was conducted in 2016 with approximately 3,500 men and 3,500 women in the Southern Nation, Nationalities and Peoples’ Region as part of a large-scale randomized trial of Unite for a Better Life (UBL) an intervention targeting the prevention of intimate partner violence and the transformation of gender norms (see Sharma et al, 2020). In the UBL survey, both men and women (in the same households) reported whether men participated in cooking, cleaning, doing laundry, and care of children. 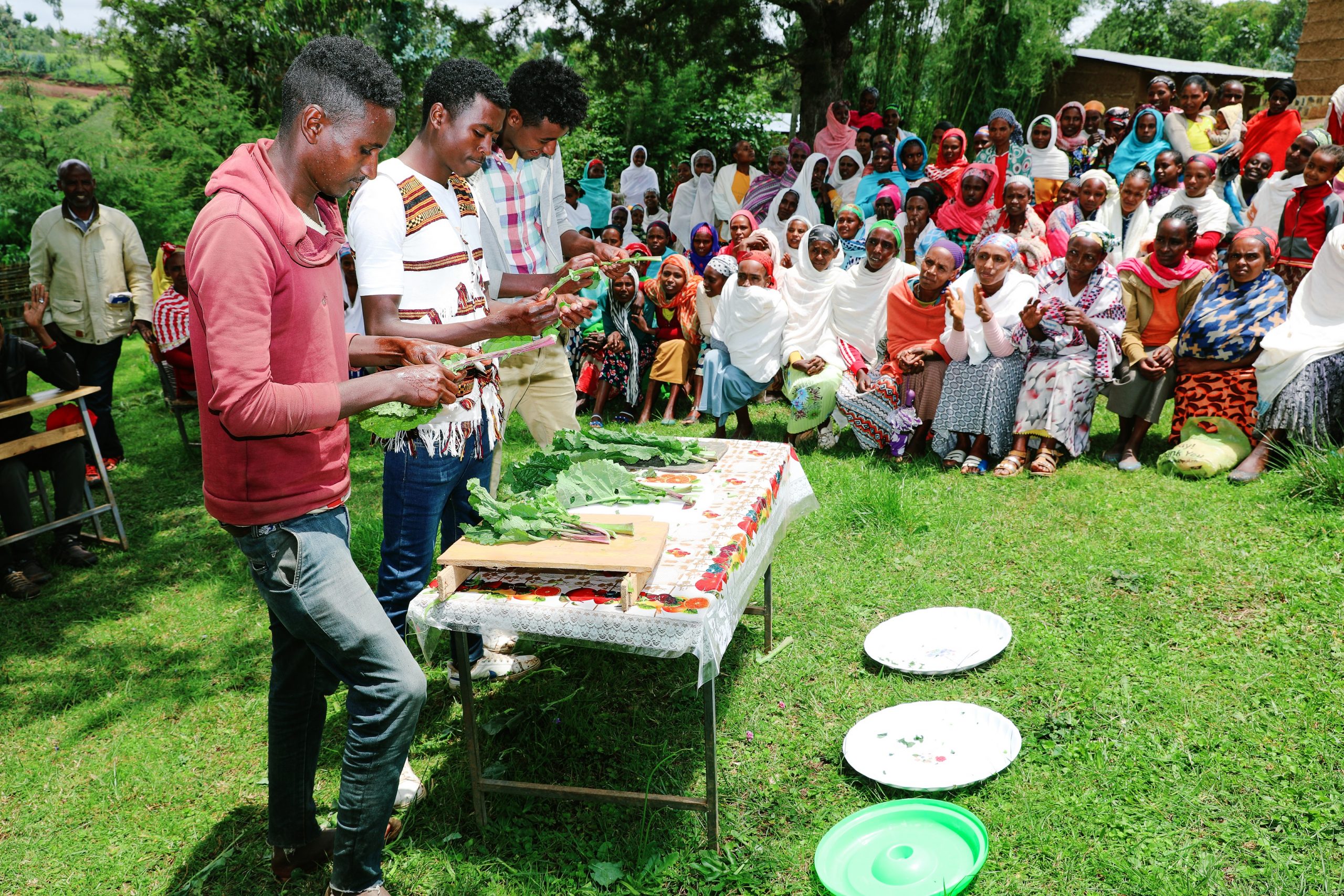 The second survey was conducted in 2020 with approximately 3,200 men and 3,700 women in Amhara and Oromia provinces as part of a large-scale randomized trial called SPIR (Strengthening PSNP4 Institutions and Resilience), analyzing a nutrition-sensitive graduation model delivered to poor households in rural Ethiopia. The SPIR survey was conducted in 2021, and both men and women (again, in the same households) reported whether men participated in chores (e.g., cleaning), cooking, and fetching water and firewood. (Men also separately reported whether they were engaged in childcare, but women did not report about this dimension of their spouses’ involvement, and thus childcare is excluded from our discussion of concordance.)

Both projects were innovative in their use of dual reports by both men and women about male participation in domestic work.  (In both cases, spouses were surveyed separately, and the survey protocols required that each survey be conducted confidentially, without the presence of the spouse or any other adult.)

Did spouses agree in these reports? Interestingly, we saw somewhat different patterns in these two contexts. In the first survey, we found quite low levels of male engagement in domestic work on average, as reported by both men and women, but a substantial level of discordance in men and women’s reports. Among women, 80% reported their husband was not engaged in domestic work at all, and 8% reported engagement in more than one domain. Among men, only 50% reported they had no engagement in domestic work, and 17% reported engagement in more than one domain.  Reflecting these different patterns, 59% of spousal pairs submitted discordant reports around the overall level of male engagement, as summarized graphically below (see Leight (2021) for a more detailed discussion of discordant reporting). 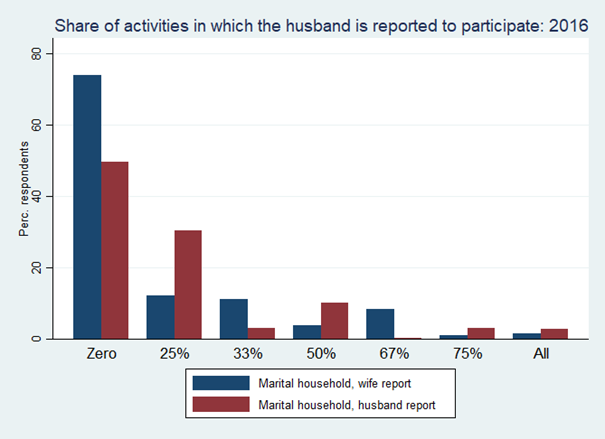 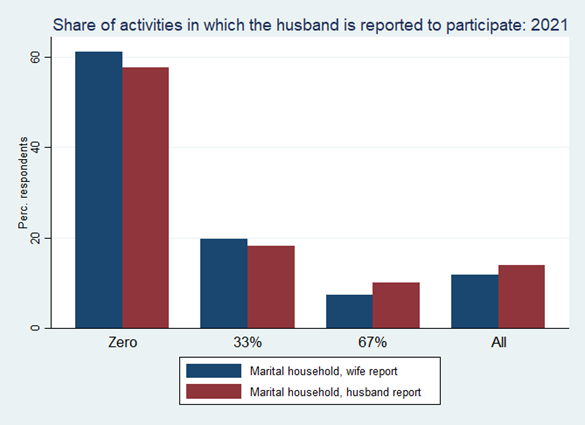 The findings from both surveys suggest that men and women can perceive male engagement in domestic work differently, though the level of discordance is not high in the SPIR sample. Exploring discordance in smaller-scale or qualitative data collection may help in clarifying whether collecting reports from both men and women on a larger scale is a worthwhile investment of resources. In cases where an intervention is directly targeting male engagement, collecting data from both men and women may allow researchers to identify positive intervention effects with more confidence.  Other promising data collection methods could include indirect questions designed to minimize social desirability bias (e.g., list experiments) or time diaries allowing for a full accounting of time invested in various tasks (including domestic work)— though time diaries can be quite time intensive for survey teams to implement. Another important point to probe in piloting or formative work is the description and categorization of domestic work. Even these two surveys conducted in different regions of Ethiopia used different descriptions of types of domestic work, and this may have shaped the responses.

Jessica Leight is a research fellow in the Poverty, Health and Nutrition Division of the International Food Policy Research Institute (IFPRI).

This story is part of the EnGendering Data blog which serves as a forum for researchers, policymakers, and development practitioners to pose questions, engage in discussions, and share resources about promising practices in collecting and analyzing sex-disaggregated data on agriculture and food security. If you are interested in writing for EnGendering Data, please contact the blog editor, Dr. Katrina Kosec.